Anthem Of The Seas Sails Into Southampton 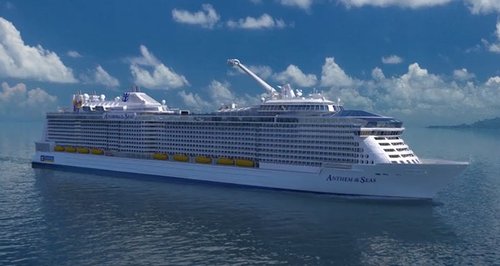 A new cruise ship boasting robotic bartenders, on-board circus skills training and virtual sky diving has arrived in the UK - and will be officially named by a 27-year-old travel agent from Sunderland.

Emma Wilby won a competition for the honour of being the so-called Godmother for Royal Caribbean International's Anthem of the Seas. The inauguration ceremony will take place on Monday.

The ship, which sailed into Southampton, its home port for the summer season, has 18 decks and capacity for almost 5,000 passengers, with more than 80,000 people expected to travel on the ship this summer.

Stuart Leven, managing director of Royal Caribbean, said: ``Anthem of the Seas is designed to deliver what today's holidaymakers want - new kinds of experiences and adventures.

``Ships like Anthem of the Seas will help attract new groups of people and build the future of cruising. The UK and Ireland is our second largest market and with over 1.7 million Britons now taking a cruise every year, it has huge importance for our business.''

The company said the ship is expected to deliver around £50 million to the Southampton economy during the summer season.