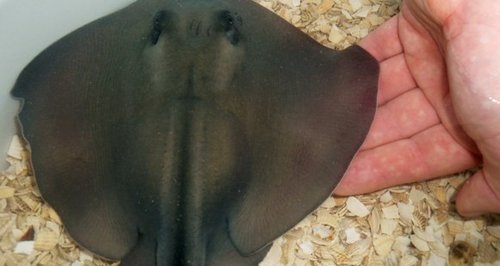 The babies, which were born earlier this week, have been given their own underwater playpen in the open top seabed display where they were born.

The pen is made from an assortment of piping and filtration mesh and provides a safe and secure environment for the babies to develop.

“The playpen allows the rays to swim in the same water as the adults but ensures we know where they are and also allows us to monitor their health and feeding behaviours much more easily.

“They are able to live off the remains of their yolk sac for the first week or so  following birth but after that we’ll have to wean them onto solid food.”

Keepers plan to keep the rays within the pen until they are large enough to look after themselves in the main display.

Stingrays have a gestation period of about six months. The eggs hatch within the mother’s body and the pups are born folded up like a newspaper, each measuring around 15 cms in diameter.

In the wild they must immediately fend for themselves and it is believed their tail stings are fully functional from the moment they emerge from their mothers.

Stingrays get their name from the razor-sharp barb on their tails which the animal uses to defend itself when threatened.

Related to sharks, stingrays have a fearsome reputation. In reality however they are generally very gentle creatures and only resort to using their stings in defence as a last resort.