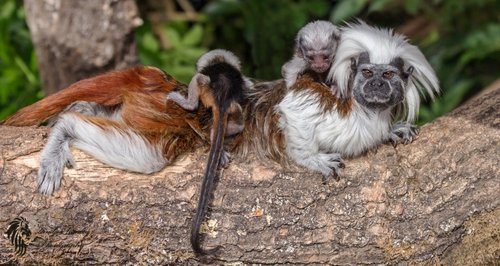 Two critically endangered monkeys have been born at Marwell Zoo near Winchester.

The zoo's pair of cotton-top tamarins have successfully bred twins.

At just over one-week-old these little monkeys can be seen clinging on tightly to Dad as he teaches them the ropes.

The twins were born to Mum, Inca and Dad, Roca. They are an important addition to the European Endangered species breeding Programme (EEP).

This species is listed as Critically Endangered on the IUCN Red List. The reduction in population is estimated to be greater than 80 per cent over the past three generations (18 years) due to destruction of habitat.

It's too early to determine whether the twins are male or female but they will be examined closely when they have had time to bond with their parents.

"Inca and Roca are first-time parents and they are doing a fantastic job for caring for the twins. Dad takes on most of the carrying duties and Mum takes over to feed them.

"Over the next few weeks the babies will begin to develop and take notice of their surroundings. Normally between 2-5 weeks old they will become mobile and start venturing off of mum and dad.

"We will expect to see them trying solid food from around a month old but they will not be fully weaned until approx 4-6 months old. Cotton tops are generally a bold species so we are looking forward to the babies becoming more independent and causing trouble."

Cotton-top tamarins maintain contact with each other by means of scent marking, facial expressions and high pitched squeaks.

The cotton-top tamarins at Marwell are fed fresh fruit and vegetables and a specially formulated supplement. They are also encouraged to catch insects by having a variety of plants growing in their enclosure.