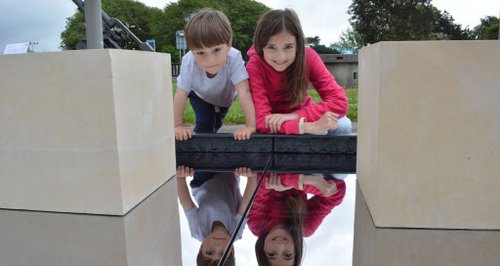 A sculpture made up of five cubes of stone from Normandy to represent the five beaches used as landing sites on D-Day has been unveiled to mark the 70th anniversary of the invasion which helped turn around the Second World War.

Architects Deer Park Alpha and artist Oliver Merkin have created the piece, which was unveiled outside the D-Day Museum in Southsea.

The five cubes of Caen stone, which weigh nearly a tonne, were transported from Normandy to Portsmouth to represent the five beaches of the D-Day landings, known by their code names Utah, Omaha, Gold, Juno, and Sword.

The cubes sit on a 15ft 8ins x 4ft 2ins mirrored stainless steel surface which represents the journey over the water to France with images of soldiers around the edges.

Carl Leroy-Smith, from Deer Park Alpha, said: ``The top surface of each stone cube is inscribed with a line which is symbolic of the Normandy coastline, broken by the attack of the allied forces as they pass through the beaches and onward inland towards the liberation of the continent.

``We wanted to pare it down into something simple, so people can make of it what they want.''

Mr Merkin said: ``D-Day was such a unique event, emotionally almost beyond comprehension to us some 70 years later. We do not wish to prescribe what veterans or visitors will feel about the piece. The abstract nature of the artwork aims to encourage reflection on what D-Day means to each individual.''

Billy Ansell, Portsmouth City Council's European project co-ordinator, said: ``This was a joint project with Caen and it was vital the artwork represented both cities.

``This is a modern but complementary addition to the D-Day Museum, which offers a moment for visitors to quietly look and contemplate the actions of those involved in the landings.''

Frank Rosier, 88, secretary of the Portsmouth branch of the Normandy Veterans Association, said: ``It's a good idea, what I like about it is they are simple, nothing elaborate, nothing gaudy and it will last the weather.

``Although I would like some more information on it as people will say 'What's that?' and the dogs will pee on it, a plaque would be nice so people know what it is.''