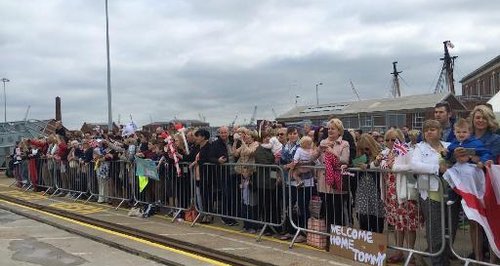 Hundreds of family members and friends have welcomed home crew members of two Portsmouth warships after months away.

HMS Dauntless and HMS Kent were both deployed on counter terrorism operations in the Gulf, protecting US and French ships launching air strikes against Islamic State militants.

HMS Dauntless returned from a four-month deployment to the Gulf where it provided air defence to the US Navy's USS Carl Vinson and the French aircraft carrier FS Charles de Gaulle as they conducted air strikes against Isis.

HMS Kent has also been on operations in the Gulf since it departed in October and has provided anti-submarine protection to the international combined task force acting against Isis.

One Royal Navy sailor, from Dauntless, got down on bended knee and proposed to his girlfriend upon his return to port. Engineering Technician Marine Engineering (ETME) Sam Luckett was the first to disembark from HMS Dauntless as it arrived at Portsmouth Naval Base at the same time as HMS Kent.

The 27-year-old ran down the gangplank and immediately popped the question to Danielle Cotton to the delight of the crowd of family and friends who had lined the jetty to greet the Type 45 destroyer.

ETME Luckett then turned to his shipmates on board the ship, stuck his thumbs up and shouted ``She said yes'' before giving his fiancee a kiss.

He said: ``I planned it before I went, I got the ring ready and arranged it with the ship. I wasn't nervous until I was on the gangplank and then I was really nervous.''

Miss Cotton, 27, from Portsmouth, Hampshire, said: ``I had no idea at all, not a clue, it feels really good. I missed him lots.''

``It is humbling to receive such a huge welcome for HMS Kent as we returned to Portsmouth after over seven months on operations in the Gulf.

``I could not be more proud of my ship's company who have made a real impact in a very volatile part of the world.''

``Returning home is something we have all been looking forward to since we started the long trip back to the UK and I thank the families of all my sailors for the continued support they have given throughout our deployment.''

Also, four babies have been born to fathers serving on board Kent while it has been away, with another four due soon.