Fire chiefs say the number of incidents in which motorists hinder emergency service vehicles with erratic driving and poor parking is worse than ever before.

The #INeedMySpace campaign from Hampshire Fire and Rescue Service comes after an increasing number of drivers have delayed fire engines getting to incidents.

These motorists are putting lives at risk by blocking off roads and even stopping on box junctions outside fire stations. 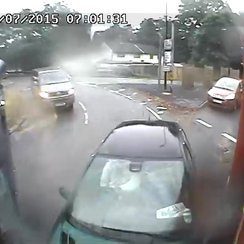 However, it is not just parking that is the problem and firefighters say some drivers are not sure what to do when they hear the sirens blaring.

Some slam their brakes on immediately and risk causing an accident while others try to tailgate behind the vehicle which can cause a crash - particularly if more than one engine has been deployed.

Some people are pulling up outside stations to do the school run or cutting through the service’s Eastleigh headquarters to avoid traffic lights.

Rushmoor Fire Station recently had several appliances blocked in when a coach parked outside bay doors so passengers could have a cigarette.

On another occasion crews were obstructed when a motorist left his car outside the building while he went for a kebab.

Now photographs and videos will be posted under the campaign hashtag to show examples of these practices and help educate motorists.

Assistant Chief Officer Andy Bowers said: “The issue of motorists blocking the paths of emergency services vehicles is worse than ever before.

“Some drivers are parking opposite one another making an entire road inaccessible while others are actually stopping by station exits, often in the hatched areas, and some are even leaving their cars on our grounds.

“On the road we have to deal with motorists who are unsure what to do to allow emergency vehicles to pass, and often slam on their brakes the minute they hear the siren, as well as people who try and tailgate when we have gone past.

"Everyone should make sure that they know what to do for emergency vehicles, and ensure that their actions do not slow our vehicles down.

“Please also remember that although you may only hear one siren, there may regularly be more than one emergency vehicle responding.

“These issues are causing delays and when tackling a fire or cutting somebody out of a car this can be the difference between life and death.”

The service is now giving guidance for motorists on how best to help emergency services get to incidents.

The golden rules are:

CALM: Don’t panic or speed up in an attempt to get out of the way. Don't go through red lights or veer into a bus lane as you will still be prosecuted. Do not attempt to outrun a fire engine. You are not allowed to drive down the hard shoulder. You will still be breaking the law.

ALERT: Turn distracting music down and check mirrors to help determine the direction and number of emergency vehicles. Look for somewhere safe to pull in but avoid kerbs, pavements, bends and junctions. Watch out for other motorists braking suddenly.

RESPONSE: Indicate, check your mirror and move to the left when it is safe to do so. Wait patiently to ensure all emergency vehicles have gone and then safely move back out into traffic.

In addition to these guidelines the public are urged to give a stationary emergency service vehicle a wide berth when moving around it.

It is never acceptable to park on the grounds of a fire station without a legitimate reason.

HFRS Academy Manager for Driving Lee Phillips said: “It is vital that people follow these safety messages which are reflected in the Highway Code.

“Nobody wants to delay the emergency services getting to an incident and by making a few small changes or understanding more about how to react when you hear a siren you could help save a life.”

“When one approaches do not panic. Consider the route of such a vehicle and take appropriate action to let it pass, while complying with all traffic signs.

“If necessary, pull to the side of the road and stop, but try to avoid stopping before the brow of a hill, a bend or narrow section of road.

“Do not endanger yourself, other road users or pedestrians and avoid mounting the kerb.

“Do not brake harshly on approach to a junction or roundabout, as a following vehicle may not have the same view as you.”