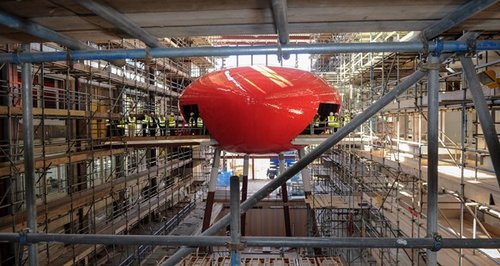 The futuristic centrepiece of a new multi-million pound building at Southampton Solent University's been finished.

The huge pod weighs 67 tonnes and sits in the middle of the new five-storey atrium - inside is an 80-seat lecture theatre.

Southampton Solent University invited civic dignitaries, contractors and University representatives to a celebration of the structural completion of the stunning centrepiece of its new building at an event on Monday 28 September.

Guests - including The Mayor of Southampton - were invited to take a closer look in and around the pod, a futuristic feature which dominates the impressive five-storey atrium of the University's new 'Spark' building, due for completion early next year.

Designed at the London office of Scott Brownrigg, the impressive structure, which weighs approximately 67 tonnes, features a full-sized lecture room with a large video wall and open-topped viewing platform with fantastic views across East Park.

Speaking about the pod, Ian Pratt from Scott Brownrigg said:

"When people ask me about the Pod they often ask 'what is it?' One response to this question is: It's an 80 person lecture room with an informal learning area on top. But of course, the Pod is so much more than that…It's the visually striking centrepiece of the atrium; a powerful guardian welcoming students, staff and visitors to the Spark and aiding way-finding. It's an international design and engineering triumph. A masterpiece of modern construction and off-site manufacturing techniques."

Southampton Solent's Vice-Chancellor, Professor Graham Baldwin, thanked main contractors Interserve; architects Scott Brownrigg and CIG Architecture for not only their hard work on the build but also the opportunities they are providing for students:

"Throughout the process the build has enhanced the experience for our students by providing student work-placements, on-site learning and guest lectures as part of their courses, so not only is the pod built for our students, but it is with the support of them as well, all adding to their learning journey."

Intended to reflect the region's nautical heritage and the University's strong maritime links, the pod has been manufactured off-site in Netherlands by CIG Architecture: a company with a history in shipbuilding and delivering iconic projects, including the cross-Thames cable car system and the award-winning media centre at Lord's cricket ground.

Putting the pod together on the University site has been a first for Interserve. "We were delighted to see the enthusiastic response from all the University staff and VIP's at yesterday's event. It made all our hard work that much more rewarding," said Justin Elliott, Divisional Director.

The pod is surrounded by cutting edge teaching and learning facilities including 35 classrooms and five lecture rooms, interactive study spaces, and a city centre conferencing and exhibition space, which will be open for use by Southampton businesses and the wider community in 2016.