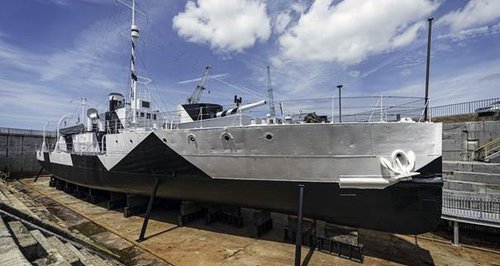 The only surviving warship from the failed Gallipoli campaign of World War One opens as a tourist attraction in Portsmouth today.

The National Museum of the Royal Navy (NMRN) will open HMS M.33 to the public for the first time in her history today (6 August), following a £2.5 million conservation project funded by the Heritage Lottery Fund (HLF).

Come the centenary of her launch, HMS M.33 will be the only First World War warship to allow visitors to walk her decks this year. HMS M.33 is positioned in No.1 Dry Dock at Portsmouth Historic Dockyard, alongside HMS Victory and the Mary Rose Museum.

HMS M.33 is the only surviving Navy ship from the ill-fated Gallipoli campaign, and as such, holds great historic importance. This is despite the fact she was constructed and sent into service so speedily that she did not even warrant a name. Fabricated in just seven weeks she was one of nearly forty ¡§monitors¡¨ built in a rapid construction campaign following the outbreak of First World War. Although the Gallipoli Campaign claimed 100,000 lives of personnel from all round the world, M.33 was considered a lucky ship and, despite being showered by shell splinters, she suffered no casualties.

Whilst in service HMS M.33 housed 67 men and five officers for over three years. Starved of home comforts, the men lived in her 568 ton metal shell underneath two powerful and oversize 6¡¨ guns. With a top speed of just 9 knots and a shallow draft HMS M.33 was not built for comfort or speed but to allow her to get close-in to shore and fire at targets on land.

The visitor experience surrounding HMS M.33 will be unlike that of any other historic ship. Visitors will have the unusual experience of descending six metres to the bottom of the dock, before stepping aboard the ship. Public access to the dry docks has previously been limited, but the opening of HMS M.33 will allow the Museum to showcase an 1801 dock that put Portsmouth at the centre of the Navy¡¦s power. The platform at the base of the dock will allow an unseen and dramatic viewpoint of HMS M.33's bow, flat bottom and the dry dock itself.

The NMRN commissioned Ian Clark Restoration to conserve the fabric of the ship. Clark takes the approach of a fine art conservator working on a colossal scale. He and the NMRN agreed that their mission must be to accentuate what is original, so that visitors can see the hull and paint that went to Gallipoli. This is conservation in its purest form, allowing for the interpretation of the character of the ship without the addition of new paint or materials.

The NMRN and Hampshire County Council have worked as partners to develop the £2.5 million 'Commemorating Gallipoli - the HMS M.33 Project', part of the NMRN's wider 'Great War At Sea 1914-1918' programme to mark the Royal Navy's First World War. A special exhibition, 'Gallipoli: Myth and Memory' opened in March 2015. The Heritage Lottery Fund (HLF) awarded £1.79 million to the NMRN to restore and open HMS M.33 to visitors.

"The role played at Gallipoli by the Royal Navy and Monitor Class ships like M33 in protecting soldiers in the August 1915 landings is an incredible story of perseverance, endeavour and bravery. It has a personal meaning for me as my father and his two brothers served in Gallipoli. So I'm particularly grateful that, thanks to National Lottery players, M33 is now open in the campaign¡¦s centenary year and people can experience first-hand the conditions in which the men aboard lived and fought."

Ian Clark and his team have worked to consolidate and conserve the original steelwork so to expose these original features. Later layers of paint have been painstakingly stripped back by hand, exposing the authentic and cracked paint surface below. This mammoth task has taken over 3,600 hours of work on the project and more than 275 litres of protective wax The treatment is tailored to each area of the ship in order to retain as much of the historic surfaces as possible, whilst also carefully removing ineffectual, modern surface treatments.

The unadorned interior of the ship lends itself to an original way of presenting the exhibits inside. Visitors will enter an immersive battle experience, powerfully evoking life aboard the vessel. The cavernous Engine Room will house a digital projection of the Gallipoli Campaign unfolding, that is projected directly onto the historic hull. This dramatic presentation sites alongside restored areas which give an authentic impression of 1915, allowing visitors to engage with the history of the vessel, as well as the stories of those who lived on board.

"HMS M.33 is a small ship but has a big history. It will be wonderful to open the ship to visitors this year on her centenary - finally we'll be able to share the story of her part in the Gallipoli Campaign, and reveal what it was like for the 72 crew who were crammed on board."