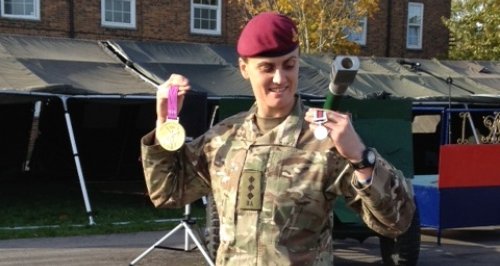 100 Soldiers of 21 (Gibraltar 1779-83) Battery, part of 47 Regiment Royal Artillery based at Baker Barracks on Thorney Island, have received their Operational Service Medals with the Afghanistan Clasp in recognition for their six month's tour of duty in Helmand.

Among the men and women who were presented with their medals from Major General Robert Weighill was Captain Heather Stanning.

After completing intensive pre-deployment training and specialist training working with the Royal Artillery's Unmanned Air Systems, her chosen specialisation, she deployed to Afghanistan in April this year.  Heather said:

"I am extremely proud to have deployed with my colleagues and as serving officer this was my chance to be tested on operations; it is what I joined the Army to do."

As the Battery Operations Officer, she was responsible for planning and managing the sorties and tasking of the British Army's 'eye-in-the-sky' unmanned aircraft, which provide vital intelligence for British and Afghan troops on the ground.  She said:

"To be in Afghanistan and to see what has been achieved and to be a part of that is really important to me."

Despite being based at Camp Bastion in the middle of the desert, Heather has worked hard to continue her training.  As well as her busy job, she has maintained a punishing regime in the gym in preparation for GB Rowing trials later this month.  With her eyes firmly set on Rio in 2016, Heather said,

"I'm now really looking forward to getting back into a boat and the challenges I will face in earning my place in the British Rowing Team for the 2014 season.  I am going to have to work hard but I can't wait."

"The Army is about people who work hard and play hard.  Heather Stanning is the ultimate example: Olympic Gold last year; on the front line this year.  Amazing!'

Heather commissioned into the Royal Artillery in 2008, and after 18 months as a Troop Commander her potential as an elite rower became increasingly apparent.  After a 2 year career break spent training for the London Olympics she was keen to return to the Army.

The troops have only recently returned from Afghanistan having served six months on Op HERRICK 18.
The medals parade and presentation ceremony took place at their base, Baker Barracks on Thorney Island on Wednesday 13th November.