Three men and a woman have been jailed for life for the murder of Jamie Dack in Southampton.

26-year-old Andrew Dwyer-Skeats, 21-year-old Donna Chalk and Ryan Woodmansey, 31, were convicted at Winchester Crown Court on Friday 21 June of the murder of the homeless 22-year-old, on 6 April 2012. Lee Nicholls, 29, had already pleaded guilty.

Nicholls was given 34 years, Woodmansey got 30 years, Dwyer Skeats was given 32 years and Chalk 25.

Outside court, Jamie's family said they were 'very pleased' with the sentences handed out by the judge. Jamie's dad Eddie spoke to the waiting media (see below). 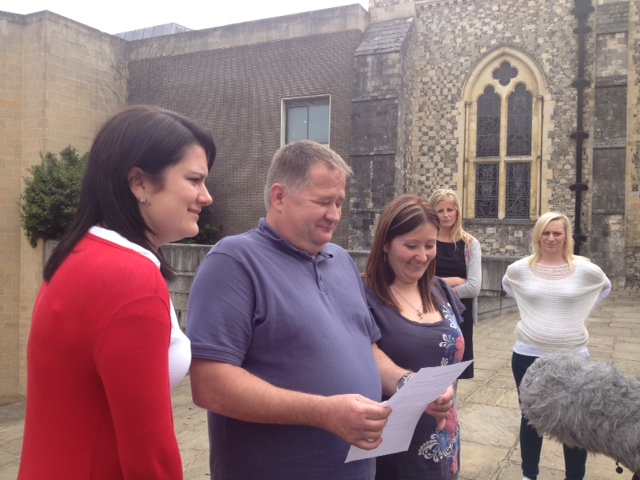 Last year, all four pleaded guilty to perverting the course of public justice, an offence which related to their efforts to destroy all incriminating evidence from the scene of the crime and, in particular, the disposal of Jamie Dack’s body. It was found in a burning bin on the Empress Road Industrial Estate, when firefighters were called out in the early hours of 8 April 2012.

“Over the course of a number of hours, Jamie Dack was beaten, humiliated, tortured and eventually killed by these four individuals acting together. Mr Dack, a vulnerable young man, had had the misfortune to cross the path of this group of people who he believed were his friends, but who in fact were to brutally end his life.

“After murdering him, the defendants attempted to erase any evidence of their shocking crime by placing Mr Dack's body in a wheelie bin and setting fire to it. Members of the public alerted the fire brigade who arrived at the scene in the early hours of Sunday 8th April 2012.  Once the fire had been extinguished, the fire officers thought that the bin contained a shop mannequin, but on closer inspection they made the gruesome discovery that it was a body.

“Over the course of a ten week trial, the Jury at Winchester Crown Court heard evidence about the extreme, prolonged and protracted violence that was inflicted upon Jamie Dack, and which led to his death.  Even at the conclusion of the case it remains difficult to understand what drove the defendants to behave in the way they did towards Mr Dack.  It is plain that there were mixed and developing motives, each of which fuelled the increasingly violent situation and ultimately led to the murder.

“Their initial motive was the stealing and selling of Mr Dack's few possessions and withdrawing what little money he had from his bank account in order to buy drugs and attend a rave.  On the day before the murder, the violence quickly escalated after false allegations were made that Mr Dack had inappropriately touched the ex-girlfriend of Lee Nicholls, who wanted to get back with her.  Complicit in these lies, Donna Chalk knew that this would enrage Lee Nicholls and Andrew Dwyer-Skeats, and it seems that it gave her pleasure to wind them up to a state of uninhibited aggression in this way.

"The three defendants armed with a baseball bat attacked Jamie Dack in the evening of Thursday 5th April 2012 and left him, bloodied and semi-conscious, on the floor overnight.  They resumed their violent attack the following day using feet, fists, glass bottles, a baseball bat and three knives, whilst Donna Chalk encouraged them in their violence.  At one point the violence was interrupted so they could take a photograph of Jamie, bleeding from the stab wounds already inflicted, on his own mobile telephone.

“At no point did any of them show any remorse for what they did or display any empathy towards the plight of Mr Dack.  After killing him, they cleaned the flat where they had tortured and killed him and three of them (Woodmansey, Dwyer-Skeats and Chalk) left his body there whilst they attended an all-night rave in Bournemouth.  The next day, all four Offenders attempted to destroy the body.

“Lee Nicholls pleaded guilty to the murder at the first trial in November last year, which left the three remaining Offenders to face this re-trial.  During the course of this second trial, they tried to play down their own involvement by putting the blame on Lee Nicholls.  Today, after hearing the Prosecution and Defence cases, the jury at Winchester Crown Court has decided that each of the Offenders played a part in the killing of Jamie Dack and found them guilty.

“This was an extremely difficult and protracted prosecution, and all those involved are very satisfied with the verdicts the jury has reached today.  We would like to thank all the witnesses in this case, and we hope that these convictions will bring some kind of comfort to Jamie's family, who were present throughout both trials.  Our thoughts are with them at this time.”