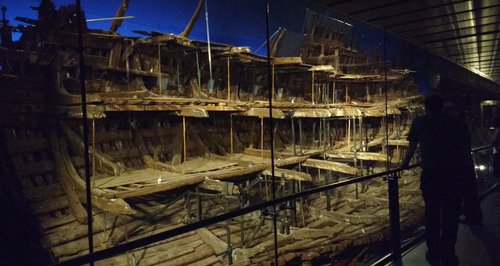 34 years after it was raised from the Solent, the new-look Mary Rose has been revealed for the first time in Portsmouth.

The timbers of the Tudor Warship have finally finished being preserved at a cost of more than £5 million. It's now fully on display next to a glass balcony.

The museum reopens to the public on Wednesday 20 July.

For the first time in 23 years visitors will breathe the same air as the Mary Rose. The new-look Mary Rose Museum provides panoramic views of the ship from nine galleries through floor-to-ceiling glazing on the lower and main decks. On the upper deck visitors enter the Weston Ship Hall via an airlock and are separated from the ship only by a glass balcony.

The Mary Rose has been undergoing continuous conservation since she was raised in 1982. The hull was first sprayed with a mist of fresh chilled water and then with a water-soluble wax from 1994 to April 2013 when the Mary Rose entered a stage of controlled air-drying. The hull has now reached a stable state within this drying process, which means all the black drying ducts, which provided the environment and conditions around the ship, have been removed giving a completely clear and uninterrupted view.

“The story of the Mary Rose spans almost 500 years and this is a very exciting close to the latest chapter in her history. From the 20th July visitors will have stunning panoramic views of the ship from all nine galleries. This is the culmination of decades of hard work by the Mary Rose team and we can’t wait to share this stunning new experience with everyone."

“Quite simply, the Mary Rose is awe-inspiring. Over the years since her discovery and, in 1982, her subsequent raising from the sea bed to her display in this wonderful museum, each chapter of her life has intrigued and thrilled in equal measure.

"After decades of hard work, this final part of the conservation jigsaw brings the Mary Rose back into clear focus and spectacular context. To so many a huge debt of gratitude is owed; particularly to those whose vision, dedication and skill have made this vision a reality; and to the National Lottery players who enabled HLF to make grants of £26 million to this remarkable evocation of our national maritime heritage.”

The story of The Mary Rose in numbers:

COVID-19: Working from home, COVID passports and mask-wearing to go as England Plan B rules to be lifted