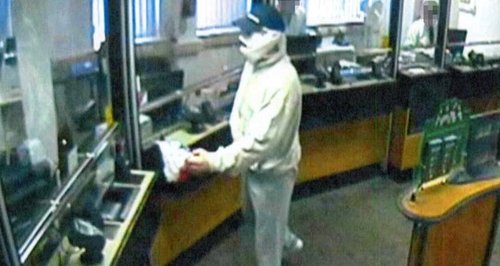 Hampshire Police have released CCTV of a robber who raided a bank, with bandages wrapped around his face and hands.

He threatened staff in Lloyds in Station Road in New Milton last month - and escaped with cash.

On Thursday 16 April, at 3.20pm, a man entered the front of the bank, approached the cashiers and demanded they hand over cash. He left via the entrance and made off up Station Road, turning left into an alleyway by Lloyds Pharmacy into the car park on Spencer Road. He made off with a small amount of cash.

Detective Constable Steve Roman said: “I am keen to hear from anyone who might recognise the man in the CCTV or anyone who has any information about this incident."

If you have any information which might assist with the investigation or identify the offender then please contact DC Roman at Southampton police station on 101 quoting 44150127740 or the anonymously through the charity Crimestoppers on 0800 555 111.