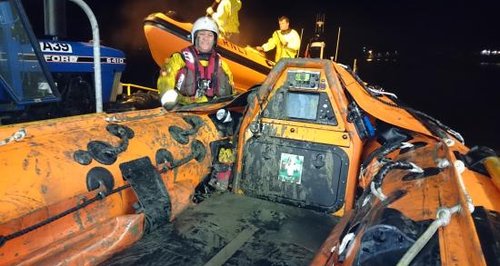 A dad and his 13-year-old son have been rescued by Portsmouth lifeboat crews after their fishing boat got stuck in mud.

Both Portsmouth RNLI Lifeboats where launched last night (Monday 8 June) at 8.24pm to reports of a motor vessel stranded on the mud in Langstone Harbour. A member of the public had heard shouting and called the Coastguard for assistance.

As the tide was very low the Portsmouth Inshore Lifeboat (ILB) Brians Pride was immediately launched to make contact and establish the current condition of the persons on board. The father and son had been fishing near South Binness Island and hadn't noticed the rate at which the tide was falling, causing them to become grounded on the mud. They initially attempted to free the 16ft boat themselves by entering the shallow water and dragging it free - but cold, wet and exhausted, the pair struggled to make way in the fast falling tide so called for assistance.

Due to the thick, deep and sticky mud the ILB and its crew were unable to get within 100 metres of the casualties, so stood by relaying updates to Solent Coastguard and shore based units. But with night quickly descending and the wind picking up, the wet casualties were at risk of developing hypothermia, so an evacuation was requested.

A specialist mud rescue team from Portsmouth Coastguard was tasked to assist and met a crew for the larger Portsmouth Lifeboat Norma T at the RNLI Lifeboat station in Ferry Road.

Once kitted and ready to go the Coastguard mud rescue team boarded the lifeboat and was taken up the harbour to assist with the evacuation. After reaching the two casualties a medical assessment was performed and an ambulance requested for further treatment.

Using a sled, the father and son where pulled nearly 150 metres across the mud to Portsmouth Lifeboat and then rushed to the warmth of the Lifeboat Station and waiting paramedics.

The Coastguard mud rescue unit and smaller Inshore Lifeboat remained on-scene to secure the vessel before the next high tide and then returned shortly after at approximately 12.30am.

While the pair were being taken off to hospital the Volunteer Lifeboat crews and Coastguard Rescue unit recovered to station and began the clean up operation. An hour later both boats had been jet washed, scrubbed down and re-fueled ready again for service.