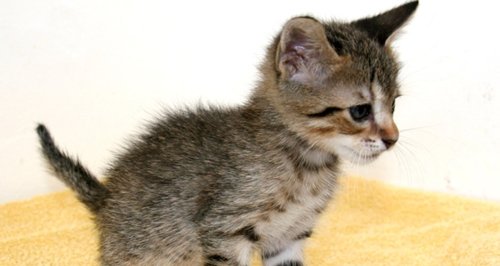 A kitten has been found hundreds of miles away from home in Portsmouth after it stowed away on a lorry which arrived in the UK by ferry.

The tabby, who has been given the name Paella, was spotted by border officials during a routine search of the Spanish HGV as it arrived at Portsmouth International Port, Hampshire.

When the youngster was found, vets were not sure if it would survive but it is now recovering and will remain in quarantine until November when a local home will be found for it by the Cats Protection charity.

Steve Bell, environmental health team leader at Portsmouth City Council, said: ``Paella was found cowering in the back of the HGV. We can only assume he had been with his mother and siblings and they took shelter in the back of the lorry at some stage. He might even have been born there.

``Maybe he was the runt of the litter, and when the rest got scared off by the lorry being loaded, he got left behind.

``It's a pretty unusual thing to happen. We hope he'll soon find a home.''

Zahir White, from Cats Protection, said: ``He was quite poorly, but after being given antibiotics and eye drops for an eye infection, he's making good progress. Once he's fully recovered and past his quarantine period, he'll be taken in by one of our nearby branches or centres and found a new home in the Hampshire area.

``Cats Protection is paying for his quarantine and vet costs, which are likely to reach around £1,300, so we'd be grateful for any donations towards this.''