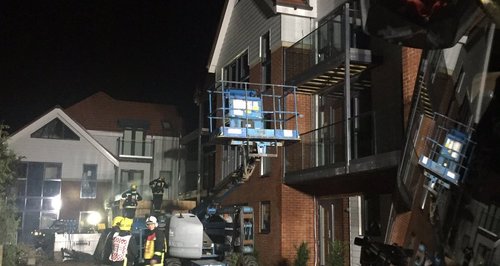 A fire in an outside generator has damaged a brand new block of retirement flats in Romsey.

20 people living in the complex in Duttons Road had to spend the night in a hotel after it broke out.

'Crews from Romsey, Eastleigh, St Mary's and Redbridge were called to a fire at a complex of residential flats.

'The fire started in a generator outside the property and around 20 firefighters managed to stop the fire spreading to the most of the building.

'However, part of the balconies and facias of three flats were damaged.

'No residents were injured, but 21 people were found alternative accommodation following the fire.

'An investigation into the fire's cause is ongoing.'

The owners of the complex, Renaissance Retirement, said:

'A fire broke in the car park of Renaissance Retirement’s Fleur-de-Lis building on Jubilee Road side this evening (Monday 26 September at around 7.45pm).

'The fire was spotted by one of the staff at the company who immediately raised the alarm and started to evacuate owners from the building.

'No one was hurt in the incident and Renaissance Retirement has put up all 20 residents in a hotel tonight.

'The Fire Brigade are undertaking their own investigation into the cause of the fire and will report their findings to Renaissance. Renaissance Retirement will put out a further statement in the morning once the company has assessed the situation further.'

“The main consideration is the health and safety of our owners and local residents. Our owners are all now comfortable in a nearby hotel for the night.

“I’d like to thank the emergency services who were there in minutes and did a first class job tonight; as well as my colleagues at Renaissance who were able to give our owners the support they needed. I’d also like to thank our owners who also remained in good spirits.”

In a statement on 23 September, Renaissance said:

'Following a failure to deliver mains electricity to Renaissance Retirement’s new development of 52 sheltered apartments on Duttons Road, Romsey for the elderly as scheduled, the situation has resulted in the company having to rely on emergency power for their residents in the form of two temporary generators.

'Regrettably the generators, which are required to provide power to the building 24 hours a day, have caused noise and disturbance to nearby residents.

'This has resulted in complaints from some residents to the Environmental Health Officer at Test Valley Borough Council who on Wednesday this week (21 September 2016) served a Noise Abatement Notice on the Company requiring Renaissance to abate the noise nuisance no later than 6pm the following day (i.e. by 6pm on Thursday 22 September 2016).

'The company instructed qualified noise consultants, Sound Advice Acoustics Ltd, to investigate the level of noise being generated and to recommend appropriate measures to be carried out to insulate the two generators from noise emissions to an acceptable level so as to overcome complaints from neighbours and to enable the elderly households to safely remain in their new homes.

'Those noise readings were carried out during Wednesday night on the same day that the Abatement Notice was served. The following morning the consultants presented their findings and recommendations to Renaissance for the noise insulation of the generators.

'On receipt of those recommendations, Renaissance immediately instructed its site contractor to source the materials for the insulating structures and work started the same day on their fabrication.

'As at noon today (Friday 23 September) the first of those insulation units to one of the generators has been completed with the second due to be fitted to the remaining generator tomorrow morning (Saturday 24 September).

'On completion, the noise consultants will carry out further noise readings to ensure that noise levels near to neighbouring properties have been reduced to an acceptable level and to report on whether any further measures are required.'