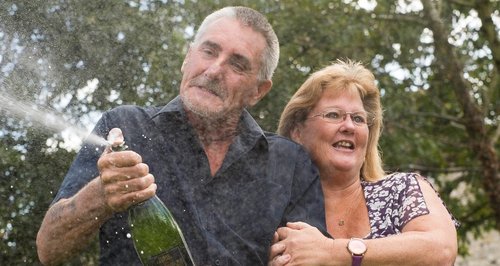 A Southampton lorry driver and his partner celebrated winning more than £2 million on the Lotto with a takeaway curry and have pledged the money will not change them.

Now Mr Rich has retired from his job as the driver of a refrigerated food lorry and plans to get his private pilot's licence (PPL), which has been his dream since he was a 10-year-old boy.

Announcing their win at the Grand Harbour Hotel in Southampton, Hampshire, Mr Rich said that he normally made deliveries to the hotel - not be its special guest.

He said: ``I deliver here as it happens, but always by the back door, not the front door.

But Mr Rich said that the win would not change their personalities, and they had no plans to move from their three-bedroom council house or sell his 14-year-old Citroen C5 car.

He said: ``It's indescribable, it's fantastic, it's going to totally change the way we live, from a lorry driver living in a council house to the world's our oyster, our lives, they have changed forever.

``The money will make life a lot easier, but it won't change the way we are, our characters, we are never going to change that.''

He added: ``Nobody could say we got carried away with ourselves. The first purchase we made as multimillionaires was a 99p tube of decorators' filler and we celebrated with a takeaway meal.''

He said that for the meal, which cost £15 with a £4 discount, Ms Dunn ordered a chicken curry with plain rice, he had a chicken korma with egg fried rice and poppadoms and mango chutney.

Mr Rich said that he had always said he was ``rich by name but not in pocket'' and added: ``Now I'm rich in name and in pocket.''

But he said his nature was always to buy cheaper products, and had no interest in buying flash cars.

He said: ``The money isn't going to change us, we will still buy the cheaper things, it's ingrained in us, I wouldn't go out and buy a car, it doesn't interest me.''

The couple, from Southampton, said they did intend to take their family on holiday.

The family has four children, a 24-year-old son, two boys aged 11 and nine, and a six-year-old girl.

Mr Rich said: ``I am an avid plane enthusiast and spend hours watching and recording planes all over the country.

``I've occasionally been able to travel abroad for my hobby, but with a young family these trips have been few and far between.

``Now I can finally take the whole family on exciting holidays - by plane, naturally - and also take my private pilot licence, something that before was quite simply, a pie in the sky dream.''

The couple, who have been together for 21 years, also now intended to get married - but again said it would not be a lavish affair.

He added: ``I've worked hard all my life. I was a commercial fisherman and more recently a lorry driver, so I really know the meaning of hard work. Getting a lucky break like this means I can take things a bit easier now, spend more time with the family and really plan for a very bright future for us all.''