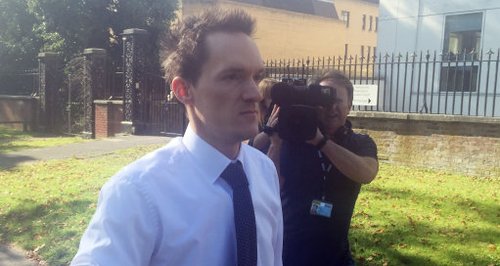 A Hampshire doctor has brought "disgrace on his profession'' by creating "fantasy'' letters from the AA saying his car had broken down to avoid parking fines.

Dr Vincent Leaper was sentenced to carry out 180 hours of work at Southampton Crown Court after he pleaded guilty to four counts relating to the offences which happened during a five-year period in the Southampton and Winchester areas.

He was also ordered to pay £3,272 court costs and £330 of outstanding parking fines as well a victim surcharge fee.

The medical doctor, who is based for much of the year in Ukraine, attempted to avoid the fines by forging letters from the AA stating his Jaguar car and a hire car had not been moved because it had broken down.

The letters, which Leaper had bought on the internet, featured the signature of an AA employee who had left the company and had actually died in 2010, the court heard.

Duncan Milne, prosecuting, said that the 40-year-old had used the fraudulent technique to avoid seven parking fines between 2009 and 2014.

He said: ``The letters sent with the AA reports effectively concocted a story of a vehicle breakdown.

``He put some imagination into it saying passers-by helped push the car to a place of safety. It was a work of fantasy and fiction.''

Mr Milne said that Leaper wrote to the councils asking for a caution to avoid being prosecuted. He said: ``He was asking for a second chance that they give him some kind of warning for his misconduct and he would keep the loophole to himself - it wasn't a loophole, it was an outright fraud but that goes some way to show the thinking of the man.''

Mr Milne said that the defendant received a caution in 2003 for using a forged tax disc and another caution in 2013 for avoiding parking charges at Luton airport parking.

Leaper, who frequently travels to the Ukraine where his partner and child live, would park in the medium and long-term car parks but would only pay for the final days through an internet booking enabling him to avoid the majority of the cost.

Mr Milne said: ``He felt aggrieved that he felt the parking charges had gone up, he felt he was a loyal customer and he would effect his own discount.''

Sentencing him, Recorder Richard Davison said: ``You inconvenienced the public, you put the city councils concerned to unnecessary time and trouble and you brought disgrace on yourself and your profession.

``You have not shown much remorse for these offences which were made worse by the fact you were cautioned on two previous occasions.''

He added: ``You have carried out valuable work as a doctor, you put your profession in jeopardy as it very well may be the GMC will take a very dim view of this conduct.''

Mark Ashley, defending, said that a General Medical Council disciplinary hearing would be held into his conduct and he could be struck off.

He said: ``Mr Leaper has been incredibly stupid and incredibly foolhardy. It's not just the view of this court, it's going to affect him in his professional life as well, the GMC will have a hearing on whether he would be suitable to continue practising as a doctor.''

He said that some of the parking offences happened when he spent up to three months at a time in the Ukraine working as a doctor in the conflict zone as well as looking after his child.

Mr Ashley added: ``He offers his sincerest apologies and will now sort out what he is going to do in the future.''

The prosecution was brought jointly by Southampton and Winchester city councils.