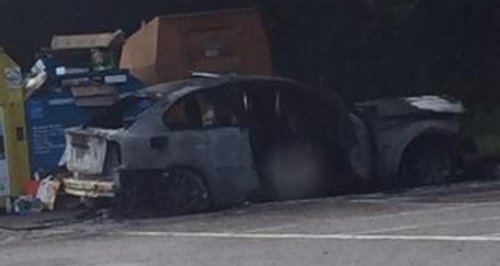 A man's been charged - after petrol was poured on a car and it was set on fire near Fareham, with a teenager inside.

He escaped unhurt, in the car park at the Locks Heath Centre on Sunday 12 June 2016. Another vehicle pulled up alongside him, a man got out the vehicle, poured petrol on the 18-year-old man's car, and set it alight.
Chad Denby, who is 21 and from Drake Close, has been charged with arson with intent to endanger life.
A Hampshire Police statement said:
'Detectives have charged a 21-year-old man as part of an investigation into a car fire at Locks Heath Centre.
'The incident took place at around 3.45pm on Sunday, June 12.
'Chad Dendy, 21, of Drake Close, Locks Heath, has been charged with one count of arson with intent to endanger life and has been remanded in police custody.
'He is due to appear at Portsmouth Magistrates' Court on the morning of Tuesday, June 14.'
(Pic: UKNIP)