A year to the day since Chichester astronaut Tim Peake blasted off for the International Space Station - a museum exhibition dedicated to him is opening in his home city.

The Novium's new permanent display has been put together with help from Tim's dad Nigel.

Their mission begins by finding out about the Soyuz rocket, from its take off to landing - including watching the moment that Tim blasted off into space. As well as viewing artefacts, such as the flight suit Tim wore on his space mission, they can discover what it's like to live in space, from eating, sleeping, to even exercising in the International Space Station. They can then find out about Tim's space walk and even get involved in scientific space experiments and other interactive activities.

They can then try on a space suit or experience what it is like inside Tim's sleeping chamber, which recreates the experience of living and working in Space.

"When Angela and I describe Tim's astronaut exploits we use the word 'surreal'. It still seems surreal now when you look around this exhibition and think is this really him. He's been up to space, he's done it and come back, but we remember very clearly when we received the phone call when he said 'guess what, I'm going to apply to become an astronaut.'

"Looking around this magnificent exhibition we know how much hard work has been put in by a lot of people. From my point of view, it has been great fun, especially as, at the last minute, we were able to get a real flown in space flight suit and the constriction leggings that he wore on his bumpy journey back to earth.

"We know that Tim is delighted with it. He has been coming up with ideas and supplying me with material. He can't wait to get back here to see the exhibition himself. It's just a shame his schedule, which is so strictly controlled, can't allow him to be here for the opening. But he wants to get back to visit his primary school, high school and this exhibition. He will be here. We just hope his message gets through to a lot of young people. It's lovely that there's so many hands on activities here and something for all ages and so we were delighted and thrilled to be involved from the beginning and look forward to seeing many, many people enjoying this."

Tim Peake was part of Chichester High School's Combined Cadet Forces programme, the school is one of very few state schools in the country to provide this opportunity.

Pupils from Westbourne Primary School were also impressed with the exhibition:

"I think it's amazing because it's about him and his life and what he did in space for those six months and I find it incredible. We find it very inspiring that he walked on those paths where we would walk, he learnt there and he became an astronaut and he went to our school."

"I think it's really nice that The Novium Museum is putting the effort in to celebrate what he's done and because he's such a good story for the area and they've done all this for him. I think we just need to believe in him because if he started at our school and he was in space surely we can do that if we wanted to."

The exhibition, which is officially backed by Tim and his family, takes visitors on a space journey that follows his astronomical adventure from growing up in Chichester to becoming the first British European Space Agency astronaut. 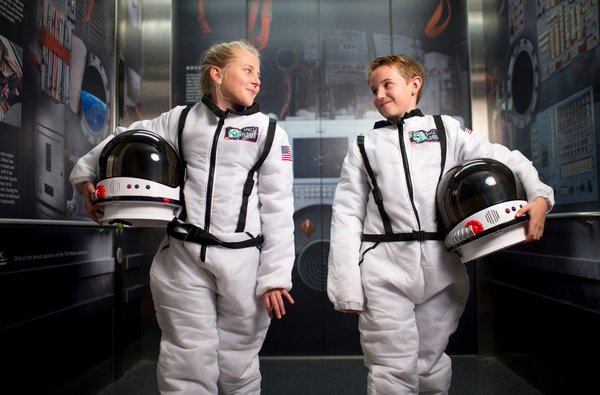 The UK Space Agency has provided funding for the exhibition as part of the 2016 Principia Mission Grant Scheme. The UK Association for Science and Discovery Centres Programme "Destination Space" is also backing the exhibition, which explores careers in space in order to inspire young people to follow in Tim's footsteps.

"We are really excited for the exhibition to open in Tim's home city," says Councillor Gillian Keegan, Cabinet Member for Commercial Services at Chichester District Council. "We are all so proud of his phenomenal achievements and can't wait for visitors to celebrate these with us.

"The exhibition will allow people to experience Tim's mission first hand whilst placing an emphasis on and encouraging young people to get involved with STEM (Science, Technology, Engineering and Mathematics) subjects."

Cathy Hakes, Manager of The Novium Museum and Tourist Information Centre, says: "It's been inspirational working alongside Nigel and Angela Peake, the UK and European Space Agencies and the Destination Space Programme and I would like to thank them all for their support throughout the project.

"We would also like to thank our sponsors, Air Products, Irwin Mitchell Private Wealth and Vanderbilt Homes for their support in enabling this exciting exhibition to take place."