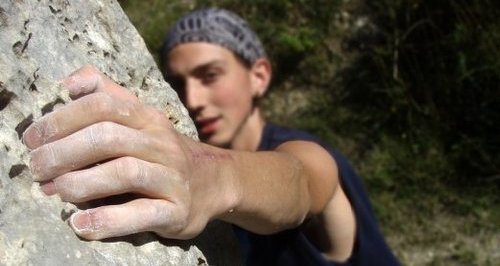 A 23-year-old Hampshire climber who died alongside the teacher who introduced him to the sport "lived for'' climbing, his sister said.

Jack Hutton-Potts and Vaughan Holme, 48, went missing when they were climbing in the North Stack area of Holyhead, Anglesey, on Saturday evening.

Their bodies were recovered from the sea off the north Wales coast the following morning.

It is believed they were climbing near Parliament House Cave, Gogarth Bay, when the accident happened.

Today, Mr Hutton-Potts' older sister Anna Miller, 30, paid tribute to her brother - who turned 23 just two weeks ago - saying he was an experienced climber who would not have taken any unnecessary risks.

Mrs Miller said her brother, from Petersfield, was at the end of his first year studying biomedical science at Sussex University in Brighton and had gone for a weekend climbing with his former climbing tutor Mr Holme.

"It was apparently just a very casual climb, if you were comparing it to a run it was like going for a bit of a jog,'' she told the Press Association.

"Apparently he had said to his girlfriend that if the weather was awful they would probably spend the weekend in the pub, it wasn't going to be a big climb.

"Climbing is what he loved and lived for, so for him it was a fairly ordinary trip.''

Her brother had known Mr Holme since he was at school at Christ's Hospital School near Horsham, West Sussex, she said.

"Vaughan was his climbing tutor at school, he had introduced Jack to climbing and they stayed in touch.''

Mrs Miller, who lives near Guildford, Surrey, said the men were due to meet two other friends from Boulder Brighton climbing centre, where Jack worked, who had also been climbing in the area, at 10pm on Saturday night, but the alarm was raised when they did not show up.

Her parents were informed they were missing and on Sunday morning the bodies were found.

Mrs Miller said both men were experienced climbers and admitted it may never be known how and why they fell.

"They were both very experienced climbers. Jack really trained for it. He wasn't a weekend hobby climber, he took it really seriously. At one point he thought he might do it professionally,'' she said.

"They have obviously fallen but we have no idea why, which is pretty awful.

"We know that Jack was standing and belaying Vaughan - they have to abseil down the rock to climb back up it. They had already done that and were obviously on their way back up.

"Whether the equipment came out of the rock or whether somebody made a mistake, I don't think we will ever know.

"The sea apparently was terribly rough and the weather had gone bad.''

"He had had a couple of bad falls before in his younger days and had really learned from them.''

The loss of his close friend Tim Gauntlett's brother Rob - who became the youngest British climber to climb Everest, then later fell to his death climbing in the Alps in January 2009 - had made her brother even more careful, she said.

"I think it made him quite conscious of what he was doing so he certainly wouldn't have been taking any silly risks.''

Paying tribute to her brother, Mrs Miller said: "He was passionate about everything he believed in, vibrant, very opinionated - in a good way - and would very much fight for any cause that he thought was unjust.

"He was very bright, we used to call him Jack Fact. He had the most amazing photographic memory.

"He really believed that everything should be fair and just, and he thought there was a lot wrong with the world and we always thought that he would change things.''

She said Mr Hutton-Potts was passionate about several causes, including raising money for the Multiple Sclerosis Society, as their father suffers from the disease.

His efforts included a planned climb with Tim Gauntlett of the El Capitan peak in the Yosemite National Park, which they delayed after Mr Gauntlett's brother's death, and had not yet managed to do.

Mrs Miller said her brother's death would leave a "very big hole'' for the family, including their mother Sarah, 56, father David, 60, and her own husband Richard, who had known him since he was eight years old.

Other tributes have poured in for the men, including a statement from Boulder Brighton, where Mr Hutton-Potts worked.

The statement, on the centre's Facebook page, said: "Some of you may have heard that Jack, one of our team members who was with us from opening day, died in a rare and tragic accident while climbing in North Wales this weekend.

"We're all deeply shocked and saddened by the news.

"He was a lovely man and a talented and experienced climber, whose limitless passion and enthusiasm for the sport rubbed off on everyone he met. We can't believe he is gone - our thoughts are with his family and friends.''

The centre said it would be organised a collection for the North Wales rescue services in Mr Hutton-Potts' memory.

Christ's Hospital School confirmed that Mr Holme was a teacher and housemaster, while Mr Hutton-Potts was a former pupil, known as an "Old Blue'', and had attended from 2001 to 2008.

Headmaster John Franklin said, "Christ's Hospital is a very close-knit community and the tragic loss of a popular teacher and a young Old Blue who were both experienced climbers, has shocked and saddened staff, pupils and the Old Blue community.

"A chapel service has been held for the school and we are doing all that we can to support those affected by their deaths.

"Our thoughts and prayers are with their families and in particular, Mr Holme's wife and his two children, in this difficult time.''