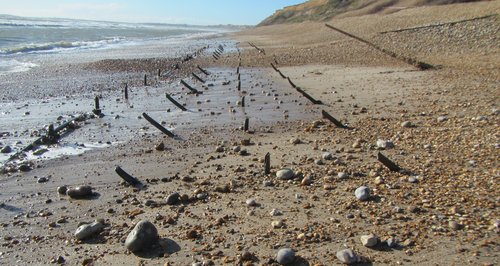 New Forest District Council is warning people using Hordle beach about hazardous metalwork on the seabed just below the waterline.

Signs have been erected at access points to the beach to alert swimmers and other water-users to the World War II metal structures.

A recent survey by a specialist dive company of the sea bed off the beach identified a jagged scaffold-like structure sticking up from parts of the sea floor. Warning buoys have now been installed over the exposed metalwork; however more remains are being uncovered by the sea at a rapid rate.

The council is strongly advising people against swimming anywhere in the area around or between the buoys at Hordle beach, until the hazard has been removed.

There are also known to be remains of other wartime metal and concrete structures in the sea between Hordle and Barton beach and the public is warned to be vigilant and advised against swimming.

Anyone noticing any structures in the sea is asked to contact the council on 023 8028 5000 and ask for Customer Services.

The difficult and costly job of removing the metalwork from Hordle beach will begin at the end of August but the quantities being uncovered by the sea may take some time to extract.

“This metalwork has been surfacing on the seabed regularly due to erosion of the beach over the decades since the war. As it is below the tide line we have to wait until the next ‘spring’ tides in August, when very low tides will allow us to get the heavy machinery close enough to the metalwork to remove it.

"Even then we’ll only have about a two hour window of shallow water to work in at each low tide.”

The line of metal scaffold or trellis was placed in the sea along the New Forest’s coast by the Wiltshire Regiment at the height of the war in 1940-41, designed to thwart invading troops and their landing craft. Unfortunately, within two tides of being installed it had sunk into the sea bed by 16 inches.

Work to dismantle the defences began as early as 1949, by which time they had sunk by several feet. Over the decades much of the structure disappeared below the sea bed, but constant coastal erosion causes new sections to reappear each year.

For the last eight years the council has been removing them as they emerge, including removing five tonnes earlier this year.