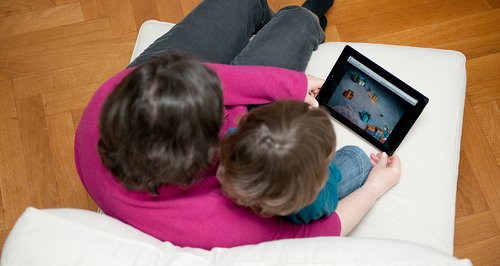 A new study by Cardiff University suggests children may be better off with a traditional bedtime story, rather than playing with tablets before they go to sleep.

The research compared the findings of studies, involving more than 125,000 children, and found those who use electronic devices at bedtime are twice as likely to suffer sleep issues than youngsters who don't spend time in front of a screen.

Experts think it's because the devices delay children going to bed, by stimulating their brains, affecting their body's natural rhythms.

Dr Ben Carter from Cardiff University's School of Medicine said: "Sleep is an often undervalued but important part of children's development, with a regular lack of sleep causing a variety of health problems.

"With the ever growing popularity of portable media devices, such as smartphones and tablets, the problem of poor sleep amongst children is set to get worse.

It's claimed 7 in 10 children have at least one electronic device in their bedroom which could be used before bed.

The researchers from Cardiff University say children who don't get enough sleep can be at a higher risk of physical problems, such as obesity and reduced growth, as well as other mental health issues.

"Our findings suggest that an integrated approach involving parents, teachers, and healthcare professionals is necessary to improve sleep habits near bedtime."