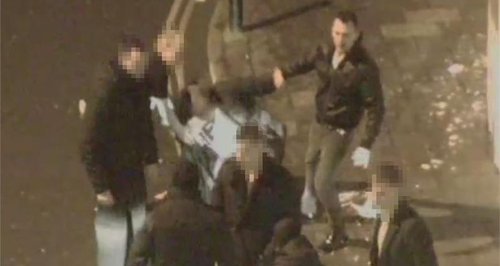 Detectives have released more images of a man they want to speak to in connection with an unprovoked attack that left the victim seriously injured in Exeter city centre.

A 25-year-old man, from the Exmouth area, was with a group of friends on Saturday 7 February when he was followed by two unknown men.

One of the men allegedly punched the victim in the face in Fore Street, between 3.15am and 3.30am. He suffered a serious facial injury as a result and attended Royal Devon and Exeter Hospital for treatment.

Detective Constable Caroline Prince, based at Heavitree Road Police Station, said: ''This was a nasty assault and we are appealing for the public's help in identifying the man pictured who may be able to help with enquiries.

''Although the image we have is not the best quality, we are hoping someone will recognise him and get in touch. ''We believe he was with another man who was wearing a distinctive white t-shirt with large dark writing diagonally across the front.

''We are also keen to speak to anyone who witnessed the incident.''