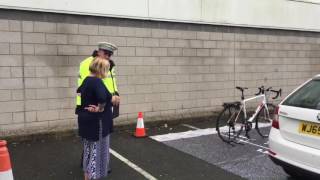 Operation Close Pass aims to improve the safety of cyclists on the road by educating drivers on how to overtake them safely.

It's hoped Operation Close Pass will raise awareness amongst motorists and cyclists on how to behave courteously to each other on the roads.

It's being supported by local and national cycling organisations.

A Close Pass operation was carried out on Billacombe Road in Plymouth during busy morning traffic on Tuesday 11th July 2017.

Volunteer police officers in cycling clothes, effectively ‘undercover’, took to the road on bicycles fitted with cameras which record the behaviour of drivers who overtake them.

If offences are found to have taken place, the officer radios colleagues further down the road to direct the vehicle into a checkpoint where the driver will be offered roadside education using a specially designed mat which illustrates the safe passing distance.

Drivers should give cyclists at least the same amount of space as vehicles when overtaking, which is 1.5 metres or approximately a car door width.

Figures from Devon and Cornwall Police show there are approximately 400 collisions involving cyclists every year, 200 to 300 of which result in slight injury, 50 to 80 in serious injury. There were 4 cyclist fatalities in each of the years from 2012 to 2016.

US stocks head for worst day since 2020 amid recession fears