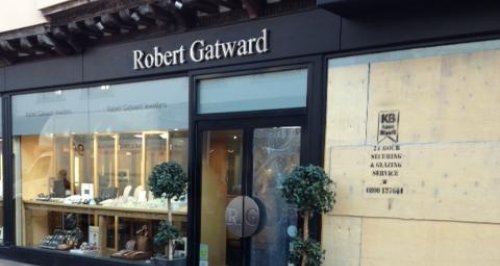 Police investigating an attempted robbery near the Buttermarket say the robbers failed to steal anything.

Police were contacted just after 4.50pm on Monday 7 October, with a report that four people on two mopeds were attempting to raid the jewellers in the Buttermarket, Ipswich.

One of the staff members at the jewellers saw the people driving slowly on the mopeds towards the shop from the direction of Queens Street.

Fearing they were about to be raided, the staff member alerted her colleagues and security procedures were activated and the alarm was raised.

The offenders attempted to smash the front windows of the shop with what is believed to be an axe and a jemmy like tool.

Entry to the shop was not gained and nothing was stolen from within. Considerable damage was caused to the shop window.

Police immediately attended the scene and the area was searched.

A number of witnesses were spoken to at the scene and descriptions of the offenders were taken as follows:

One moped was red; the other light coloured, both are believed to be Vespas.

The rider of the red moped was wearing a full face helmet and a dark coloured padded jacket.

The passenger of this moped wore a light coloured full face helmet and carried a bag with a motif over their shoulder.

The rider of the light moped wore a dark full face helmet and wore dark clothing.

The passenger of this moped wore a white full face helmet and also had a bag over their shoulder with a motif on.

The weapons used appear to be an axe and a jemmy type tool, two knives were also recovered at the scene.

Acting Detective Inspector Dan Connick from Ipswich CID said: "This is obviously quite a distressing incident for the staff at the jewellers, but thankfully due to their quick actions they were able to activate their security procedures and entry to the store wasn't gained.

"We have spoken to a number of witnesses from the scene and we are reviewing CCTV footage, however we still need to speak to anyone who saw the mopeds and those riding them as they came into the Buttermarket, which we believe was from the Queens Street direction and then as they left the scene.

"Enquiries will continue today but we are very keen to hear from anyone who has any information which could help us with this investigation."