The seaside bus was opened by family of the man known to many as Brighton's Mr Seafront or "the Seafront Reviver".
The Beach Bus is dedicated to the late Andy Durr - the much-missed former Mayor, councillor and academic who masterminded Brighton's seafront revival, and who died in December. The bus celebrates the city's famously fun-packed seafront, and carries Andy Durr's name on the front.
Andy's wife Carole Durr unveiled the name plaque.
She said: "I'm so happy Andy is being recognised in this way, and his legacy will live on.  He would have loved the idea of his name being on a bus dedicated to the seafront - and he'd have been the first to get on it and go down to the beach!" 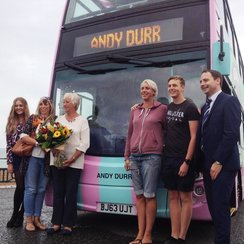 After the official unveiling, members of the public were invited to board the bus between 1130 and 1300 for beach-themed freebies (ice-creams, sticks of rock, cones of chips, badges and windmills) and the chance to record their thoughts about "what the city's seafront means to me" in a video being filmed about the Beach Bus.
This is the second in the Get Bus(y) series of Brighton-artist-designed buses that celebrate the city's unique appeal, and the way buses help people to enjoy life here to the full.
Nick Hill, Brighton & Hove Bus Company's Head of Commercial said: "Our buses play their part in helping people to have fun-filled days out - and we wanted to reflect that with this light-hearted tribute to the city's famous beach.  We're sure it'll make heads turn and bring a smile to people's faces.  And we're delighted that the Durr family have given us permission to dedicate it to Andy, with his passion for the seafront and his love of fun.  I can't think of a more fitting person to have his name on this bus." 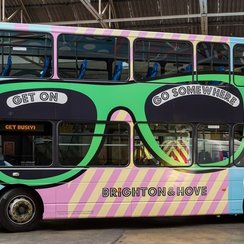 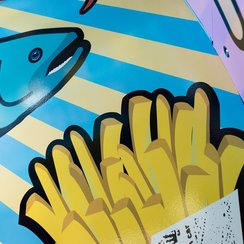 The Beach Bus's big, bold images - including a giant 99 icecream, massive sparkly sunglasses, and a monster-size seagull's head - are on a background of deckchair stripes, beach-hut colours and deco polka dots.  Insides, iconic seaside images are everywhere - from fish and chips and fruit machines to swimming trunks and sticks of Brighton rock.
Chris Harrison of the Harrison Agency is the Brighton-based creative behind the Get Bus(y) series.
He said: “The bus company asked us to design a series of buses that bring to life what an amazing city this is.  For this second bus, it just struck me how lucky we are to have this fantastic fun-filled seafront right on the doorstep:  I wanted to capture that with a design that was big, bright, bold and beautiful, like the beach itself!”
The first bus in the Get Bus(y) series featured black and white drawings by popular street artist iownthisart.

It was used as a venue in the Brighton Fringe and can now be seen around the city.

The third bus – featuring the South Downs and Biosphere – will be launched in August.

The buses are highly decorated, inside and out, and are dramatically different from each other, but they all carry the simple message: