House prices in Brighton and Hove have gone up by nearly double the national average, according to a survey by Nationwide.

A home is now 6.4 per cent dearer in the city than it was twelve months ago.

For the survey Brighton was grouped in the Outer South East region along with Bedford, Milton Keynes, Aylesbury, Oxfordshire, East Kent, Southampton and Portsmouth.

However, the overall pace of house price growth across the country is running at its most evenly-spread levels in nearly 40 years. The gap between the strongest and the weakest house price growth has narrowed to just 6.8 percentage points.

He said: "Interestingly, the spread in the annual rate of change between the weakest and strongest-performing regions was at its narrowest since 1978 at 6.8 percentage points - the second smallest gap on record.

"The South of England continued to see slightly stronger price growth than the North of England, but there was a further narrowing in the differential.''

Across the UK generally, house prices increased by 3.5% annually in March, slowing down from a 4.5% annual increase in February. 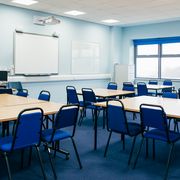 School where pupils walk to class in silence should be 'replicated across UK', education secretary says

Coronavirus UK: Which schools have been closed, how many people have coronavirus in the UK and what are the symptoms?