Hastings: Pier To Reopen Next Year

A seaside pier being revived following a devastating fire five years ago will not open until a year later than planned, it has been announced.

Storms last year are being blamed for delaying the opening of the Grade-II listed Hastings Pier in East Sussex from spring or summer this year to next March 21.

The Victorian pier has stood as a derelict eyesore since it was almost destroyed in a fire in October 2010 following years of neglect.

It is undergoing a total renovation costing more than #14 million, which has mostly come from the Heritage Lottery Fund, and more than 3,000 people have bought community shares in the company that will own and operate it. 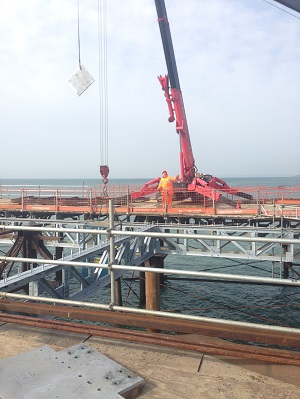 Simon Opie, chief executive of the Hastings Pier Charity, said: "We're really disappointed not to be opening earlier but the storms in February 2014 caused a significant amount of additional damage and pushed back the works three months or more.

"Almost all the work will be finished this year but not completed in time to open the pier during any of the traditional seaside trading months."

Mr Opie said it is hoped people will be able to go on to the pier ahead of its official opening next March, with Christmas pop-up attractions planned and possibly an ice skating rink.

A Hastings Borough Council spokesman said the pier's opening in 2016 will coincide with the 950th anniversary of the Battle of Hastings.

Two men, then aged 18 and 19, were arrested shortly afterwards the fire but the Crown Prosecution Service later said there was not enough evidence to bring charges.

Nothing was done by its then Panama-registered owner Ravenclaw to restore the structure, which first opened back in 1872.

The lack of effort led Hastings Borough Council to seek a compulsory purchase order so control of the pier could be handed to a specially set-up trust.

Most of the existing pier structure is being recycled or reused, with wood from the old decking being turned into benches, chairs and tables for the new pier.

Plans include funfairs, a circus, an open-air cinema and theatre, farmers' markets and a mirrored heritage centre to reflect the seaside views.