This image appears in the gallery:
Sunday Line Up 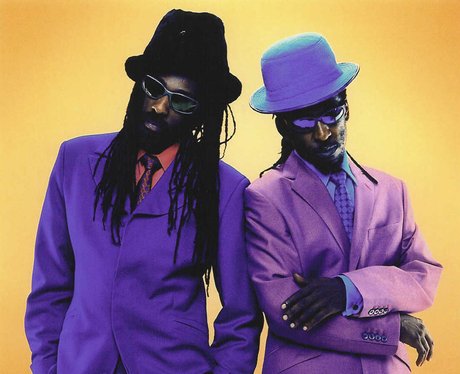 After fifteen albums and two decades on the music scene, Aswad (a name derived from the Arabic word for "black") remain one of Britain’s best loved reggae bands, renowned among reggae fans for their rich melodies and compelling harmonies, woven over hard rhythm tracks and inspired horn riffs. Formed in 1974, the trio first gained national attention in 1976 when their debut release, "Back To Africa", hit the #1 slot on the UK Reggae Charts. "Love Fire", their popular anthem released in 1981, eventually became part of the reggae canon and is still covered today by many Jamaican record producers. The band became known for their adventurous fusion of such different musical styles as dancehall, funk, hip-hop and dub and their catchword "fresh" soon became a favourite in Jamaican dancehalls. After a series of successful singles and albums on Island and CBS, Aswad earned international acclaim in 1988 with their reggae version of "Don’t Turn Around" sailing to the top of the UK chart. Aswad have toured extensively, playing to packed houses across the globe from London’s Royal Albert Hall to West Africa, Israel and Japan. Now get ready to welcome the original UK reggae masters to Rewind Festival.