Thames Valley Police is appealing for information in connection with a murder investigation in Bracknell.

It is just over a week since police were called to Hawthorn Lane in Warfield, on 24 July, after workmen, who were clearing ditches in the area, discovered human remains.

The deceased man’s identity is unknown but he is white, aged approximately 30 to 35 years old, about 5ft 9ins and is thought to have been of stocky build. 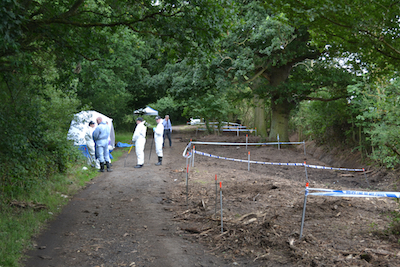 A post mortem was carried out on Sunday and, although it was inconclusive, it indicated blunt force trauma to the head, however this could not be confirmed as the cause of death.

Senior investigating officer, Det Supt Nora Holford, said: “The post mortem indicated the body had been in the ground for at least two years. The area in Hawthorn Lane is suspected to be where the remains were left but not the scene of the murder itself.

“This is an unusual case because not only are we investigating who committed the murder, we are also working to establish who the victim was.

“Forensics work is being undertaken to identify the deceased but, due to the length of time the remains have been in the ground, this will take longer than usual.

“One distinctive feature of the deceased man is the dental work that he had undergone. He had seven veneers, which is unusual as a person normally has six or eight, and his teeth would have been noticeably white.

“We believe the timeframe for when the body was left to be between two and 15 years.

“I would like to speak to anyone who knows of a person matching this description, who may have gone missing in the past 15 years.

“I would also like to speak to anyone who saw anything out of the ordinary in the Hawthorn Lane area which could help with this investigation.” 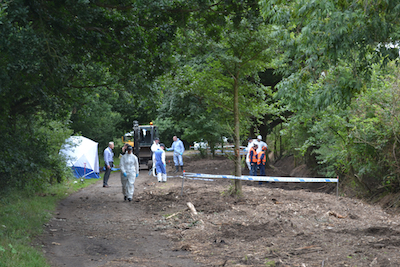 Insp Jon Goosey, Deputy LPA Commander for Bracknell said: “Residents may have noticed a high level of police activity in the area as forensic teams investigate the site and this is set to continue over the coming days.

“I would like to thank residents for their patience while this goes on. Our priorities at this time are to carry out a thorough investigation, identify the deceased, establish the circumstances and bring offenders to justice.

“We understand the concerns that local people may have and neighbourhood police officers are working with them to keep them informed and provide reassurance.”