Car Transporter Overturns On A34 In Berkshire 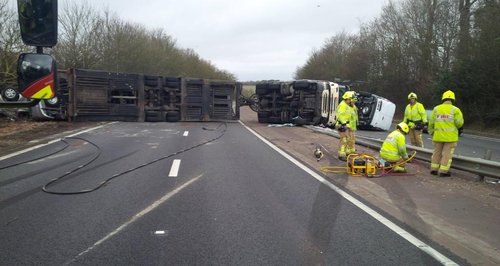 Thames Valley Police are warning road closures on the A34 are likely to be in place until later this evening, after a car transporter overturned near East Ilsley earlier today (19/2).

At around 8.15am a fully-laden vehicle transporter lorry overturned on the northbound carriageway between East Ilsley and Chilton north of the Compton turnoff.

The collision damaged part of the central reservation and one lane of the southbound carriageway was affected. The road was closed northbound all day until around 5pm, with drivers being diverted.

The lorry was carrying approximately seven vehicles, including vans, and extensive recovery services were required. Repairs will have to be carried out to the central reservation before the carriageways can be fully re-opened.

One lane is likely to be closed in both directions until 10pm tonight.