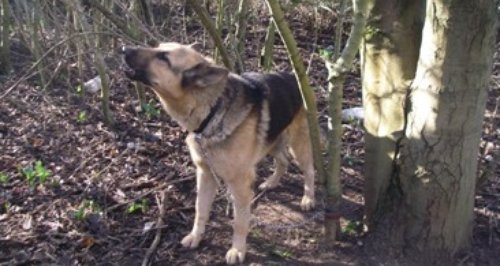 A German shepherd dog has been found abandoned and tied to a tree by a worker from a Basingstoke industrial estate who had heard the animal’s barks throughout the night.

He was hungry and thirsty after being left with no food, water or shelter. There was no note left with him and he was tied to a tree by his lead.

RSPCA inspector Jan Edwards said it was only thanks to Dougie’s barks that he was found at all.

“He wasn’t visible from the road and I’m so grateful to the gentleman who had heard barking from about 9pm until 6am in the morning. When he finished his shift he went to find out where the barks were coming from.

“If it wasn’t for him, this poor dog might not have been found. It was extremely cold and frosty on the night he was abandoned.

“He is a lovely dog, but he was clearly still very distressed when I went to collect him.”

Inspector Edwards said she was already following up some leads after a scan revealed the dog was microchipped and originally called Shadow.

“He’s now been renamed Dougie and was taken to a vet for a check-up, but he appears to be in good health so hopefully his future looks a little brighter now,” she added.

Anyone with information about the dog is asked to call the RSPCA on 0300 123 8018 and leave a message for inspector Jan Edwards.