Murder Investigation In Berkshire after a 59-year-old man's died and another's in critical condition, found with stab wounds at separate addresses in Slough.

Murder Detectives are studying CCTV after the body of a man was found at a house in Berkshire and another man is in hospital with stab wounds.

Officers say they there is no risk to the wider public. It's after officers were called to two separate addresses in Slough on Friday in Lower Cippenham Lane and also Lewins Way.

The man was taken to hospital with life-threatening injuries.

Investigating officer, Det Ch Insp Ailsa Kent of the Major Crime Unit at Thames Valley Police, said: “This is undoubtedly a distressing incident which will have caused concern within the local community. At this stage of the investigation no arrests have been made, however I believe that the only two people involved were the man who is currently under police supervision in hospital and the man who sadly died inside the property in Lewins Way. I am confident there is no risk to the wider public. 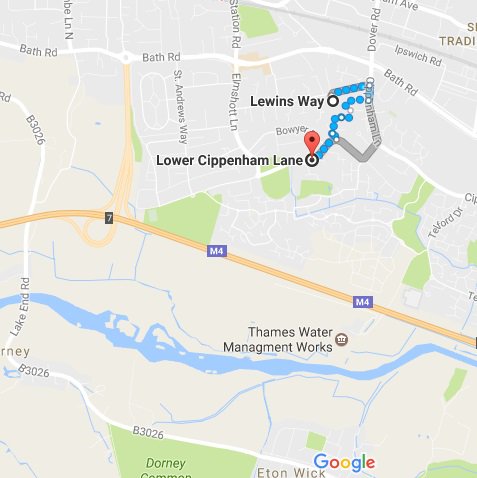 “There will be an increased presence of police officers within the local area to provide reassurance and support the ongoing investigation, as well as a team of dedicated detectives conducting an investigation. Members of the public will see a particular increase in police presence in Lewins Way where we are continuing to examine the scene and in Cippenham where officers are carrying out house to house enquiries and reviewing CCTV.

“We need help from the public to piece together what happened yesterday. I would like to hear from anyone who was in the vicinity of either Lewins Way or Lower Cippenham Lane between about midday and 7pm yesterday and who saw or heard anything unusual. The easiest way to contact police is by dialling 101 or by visiting your nearest police station.

“If you do not feel comfortable speaking directly to the police then you can contact the independent charity Crimestoppers anonymously on 0800 555 111. No personal details are taken, information is not traced or recorded and you will not go to court.

“The deceased next of kin has been informed, although the man is yet to be identified at this time.