Was George Michael The First EVER Carpool Karaoke? 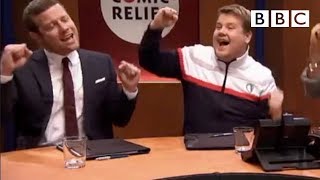 James Corden's hilarious sketches have gone onto become a viral sensation...but is this where it all began?

Rare footage of George Michael and James Corden singing along to Wham! songs has sparked speculation that this could have been the ORIGINAL idea that spawned Carpool Karaoke.

The star-studded video, which sees Corden portray his famed 'Gavin and Stacey' alter-ego Smithy, was filmed as part of a segment for Comic Relief back in 2011 and sees the cheeky actor drive his "old friend" George around in a Volvo.

Corden is called upon by Lenny Henry to lend a hand with Comic Relief but George's best efforts are turned down. The cheeky actor brands the Wham! singer "an embarrassment" and pokes fun at his headline-hitting personal life.

Smithy declares: "You’re a joke, George! It’s embarrassing. I can’t walk into Comic Relief with you – Comic Relief is about helping people like you".

To cheer George up, James blasts the Wham! track 'I’m Your Man' and it's not long before George is in the dancing mood again.

Looking back at the hilarious sketch, it's clear this was the beginning of what has become a winning formula for Corden's 'Late Late Show'.

Now the likes of Mariah Carey, Adele, Stevie Wonder and Justin Bieber have all followed suit...but who knew it was actually GEORGE MICHAEL that set the trend?