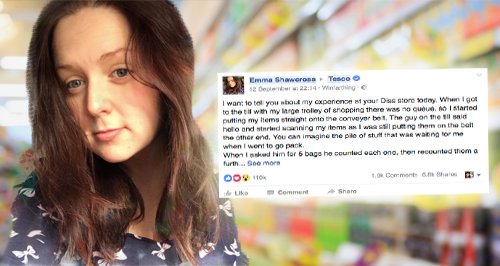 We can't cope with how cute this is...

A woman has praised a Tesco worker for his "perfect" customer service despite piling up her items and squashing her bread and counting her change numerous times.

In a lengthy Facebook post, Emma Shawcross, from Norfolk, told how she visited supermarket in the area when she came across a cashier called Rob.

Emma, who revealed she is the mother of a 12-year-old Autistic boy, praised the "changing attitudes" of employers like Tesco for giving people with disabilities opportunities.

"Changing attitudes teamed with employers, like you, who really do offer equal opportunities are a changing people's lives," she wrote in a post on the supermarket's Facebook page.

The post, which has since been liked more than 78,000 times, continued: "When I got to the till with my large trolley of shopping there was no queue, so I started putting my items straight onto the conveyor belt.

"The guy on the till said hello and started scanning my items as I was still putting them on the belt the other end. You can imagine the pile of stuff that was waiting for me when I went to go pack.

"When I asked him for 5 bags he counted each one, then recounted them a further 2 times before handing them over to me."

She added: "The guy didn't really talk to me, he squashed my bread when he scanned it but I waited patiently whilst he took his time, especially when trying to scan the awkward items.

Read more: This Father Son Carpool Karaoke Is SO Heartwarming!

"By the time I went to pay I had already worked it out, so I counted out my money with him, which he obviously recounted and then counted my change out two times.

"Changing attitudes teamed with employers, like you, who really do offer equal opportunities are a changing people's lives. So thank you Tesco, it was a pleasure shopping with you today."

While it's not yet known as to whether Rob has autism, the poignant note struck a chord with people on Facebook who left over 1,000  comments underneath the post.

The store later replied to Emma's post, saying that Robert and the store management team would be 'delighted' to hear her feedback.

Jo Marsh, store manager at Tesco Diss said: "My colleagues at the store work hard to serve customers a little better every day and Rob is no exception. 'His enthusiasm rubs off on everyone around him and he is a real credit to our store."

Aww! Can you feel the love?