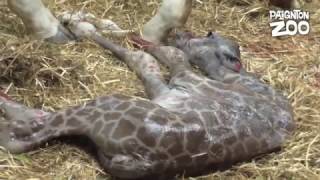 A giraffe has been born at Paignton Zoo - and the crucial moment was captured on video by staff.

The as yet unsexed calf was born to mother Sangha on the morning of Wednesday 19th April.

The Zoo's giraffe house is likely to be closed for a few days while mother and calf bond.

It's hoped that visitors may be able to see the calf from this coming weekend. The rest of the Zoo's herd will be out and about.

Since the tragic fire in early 2006, which claimed the lives of three giraffes, animal experts have patiently rebuilt the Paignton Zoo herd.

A male, Yoda, came from Givskud Zoo, Denmark in September 2006.

Two females, Sangha and Janica, came to Paignton Zoo from the Czech Republic.

This is the tenth birth in seven years. One calf died and three sadly had to be put to sleep for different veterinary reasons.

This good record in breeding giraffes is in no small part due to the patient hard work and dedication of animal and veterinary staff.

For the keepers, the birth is just the start.

The early hours are crucial: it's vital that the youngster connects with mum, suckles and receives colostrum, the special milk that contains antibodies to protect the new-born against disease; it is lower in fat and higher in protein than ordinary milk.

The gestation period for a giraffe is between 400 and 460 days.

The mother gives birth standing up - the fall breaks the umbilical cord.