A 24-year-old man has been left with facial injuries, a snapped tooth and hearing loss after he was attacked in Durham City Centre.

He was pushed to the ground and punched by two males whilst on a night out - on April 2nd.

The assault took place on Silver Street at 9pm.

The punch to his right ear knocked the man to the ground.

Passers-by raised the alarm and the group of 3 men and 1 woman left the scene in the direction of North Road.

Police are looking to trace all members of the group particularly the man who punched Jonathan, he is described as tall, medium build with black hair. He was wearing a light grey or white top, jeans, black and white trainers and a red coat.

PC Paul Vickers from Durham City Response said:
"This was a particularly nasty assault and there was several witnesses captured on the CCTV. We would like to trace the group walking towards him when he was attacked, which included two young children, as well as anyone else who witnessed the incident."

"Although his injuries were serious they could have been a lot worse, if not life changing, and it is imperative we find the people responsible. We have conducted extensive enquiries and trawled CCTV across the city and we are satisfied the group headed towards North Road. I am now asking the public for help in identifying who these people are."

Maxine Thompson-Curl, from the charity One Punch North East, added: "One punch assaults happen far too often people need to understand the horrific consequences of a single punch.

"Another person’s life has been devastated due to a needless action."

Anyone who was in the area or recognises the suspects in the group should contact PC Paul Vickers on 101. 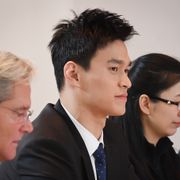