Swans Do The Double Over Arsenal 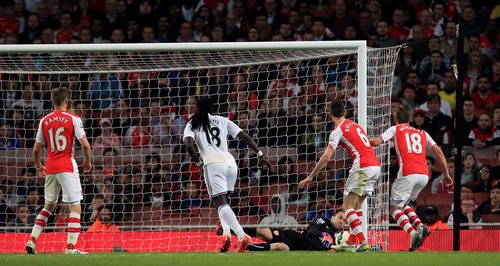 It's the first time the Swans have beaten Arsenal home and away in one season in 33 years. It follows their 2-1 win over the North London side at the Liberty Stadium back in November.

It saw a return to his old club for Swans keeper Lukasz Fabianksi who spent seven season with the Gunners. He was named Man of the Match and took to Twitter to show how proud he felt.

Without a doubt a special game to me. Thanks #JackArmy, you have been fantastic. @SwansOfficial pic.twitter.com/kWq90GaROw

The game came exactly ten years to the day since the last game at former Swansea ground The Vetch, where they beat Wrexham 2-1.

Manager Garry Monk praised his players and travelling fans after the victory.

Congrats tonight to the players & staff. Fantastic result. The win was for the 3000+ travelling jacks, amazing support. #travelbacksafe

The goalscorer was also delighted.

Important win , it was a close game ! I m happy I was able to score the game winning goal to help my team to get the 3 points .I AM JACK...