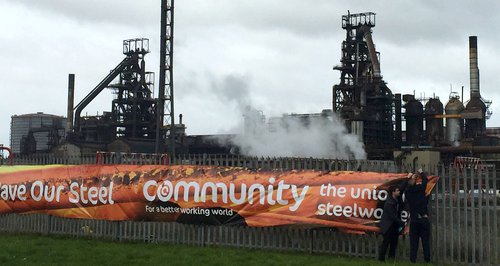 Steel unions have welcomed a deal from Tata which could safeguard thousands of jobs at its steelworks in Port Talbot.

The future of workers has been in doubt after Tata put its UK business up for sale in March.

But the company has now met with the unions and put forward a plan to invest £1bn in to the business. Tata says it will commit to maintain both blast furnaces at Port Talbot until 2021 and commit to avoiding compulsory redundancies.

But there is a sting, as in return for safeguarding jobs, workers would have to accept smaller pensions as Tata wants to scrap the current final salary scheme.

Unions have welcomed the commitment to jobs and investment but said the pension plans are "worrying".

Roy Rickhuss, general secretary of the Community union, said: "The past year has been incredibly difficult for steelworkers and their families.

"When Tata announced in March that they planned to sell the steelworks, no-one knew if they would have a job by Christmas.

"This proposal would secure jobs for years to come and bring serious investment not just to Port Talbot but to steelworks across the UK."

The announcement affects more than 4,000 staff in Port Talbot and at other Tata sites including Trostre in Llanelli and Shotton on Deeside.