The Welsh Survivor Giving Back To Nepal 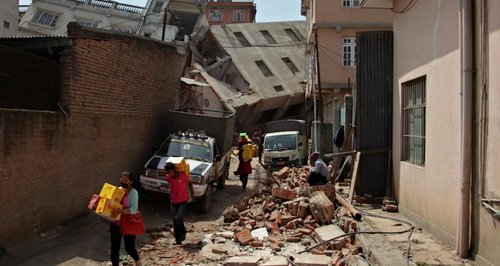 Heart's exclusively speaking to a man who's life changed when he became caught up in the devastation from the Nepal earthquake.

Justin Cava-Jones had been trekking through Mount Everest with a friend and had only recently left base-camp when the earthquake struck.

He recalls the moment he heard screaming in the distance before the rumbling became more intense and then found himself under rocks and falling rubble.

"We hit the floor and then this crazy smell of the earth, the sulphur hits you and you realise you've survived an earthquake"

After sitting through other aftershocks, he began to continue his route and described watching the path literally crumble away in front of him.  Justin is convinced if he had been twenty seconds earlier, he would have fallen to his death.

Upon reaching Kathmandu, it was only there Justin realised the true devastation that had been caused, with bodies scattered everywhere.

As many Brits acted in desperation to return home, Justin felt compelled to stay and assist in whatever way he could.

"Many were still too scared to go in their houses - expecting another wave - living in a fear paralysis - that's the way of it there, a country so beautiful and these people are some of the purest I've come across on the planet"

Justin returned home to Cardiff on Friday but is planning to return as soon as possible.

His Acts Of Kindness Collective  - an online campaign - has already raised more than £30,000 - click HERE to donate