Welsh rugby legend Shane Williams revealed that he hopes to become a success in the music industry after a glittering sporting career.

Speaking to Heart's Jagger and Woody, Shane explained that he "wanted to do something different".

He said that he's "hugely passionate about music and singing".

The former Wales winger who remains the country's record try-scorer announced that he'd launch his music career with a cover of Jeffrey Osborne's 1984 ballad "On The Wings of Love".

Shane said "It's a song I've always loved growing up and the producer who was helping me choose a song said it really suited my voice".

Welsh mezzo-soprano Katherine Jenkins called in to give Shane her support, saying "I've always thought you had an amazing voice Shane so I'm really surprised you haven't done it sooner".

Okay... we admit it! it was an April Fool. Thanks so much to Shane for being such a good sport - and everyone else who played along! 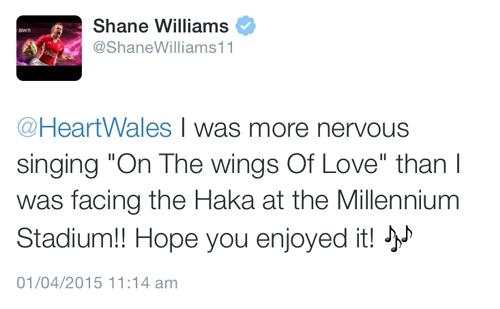