The owner of Alton Towers is facing a fine of millions of pounds after admitting breaching health and safety rules over last year's rollercoaster crash.

Merlin Attractions Operations Ltd had already accepted responsibility after an internal investigation following the incident which left two women needing leg amputations, when their carriage hit another stationary train-car on the track on June 2 last year.

It emerged that a manual operator "overrode'' the ride's governing computer system, leading to the smash.

Outside court the HSE and a lawyer for some of the victims read statements:

Indicating a guilty plea at North Staffordshire Justice Centre on Friday, Merlin's counsel Simon Antrobus said: "The company is accepting additional reasonable and practicable measures could have been taken to guard against the safety risk that arose on the day."

District Judge Jack McGarva warned that the £250 million-a-year turnover company faced "very high culpability'' over the incident and "may be ordered to pay a very large fine''.

Present during the hearing were the five most seriously injured victims and their families: Vicky Balch and Leah Washington, who each lost a leg in the crash, as well as Joe Pugh, Daniel Thorpe and Chandaben Chauhan.

They listened from the public gallery as the Health and Safety Executive (HSE), which brought the case, said that the ride had never had "a proper settled system'' for staff to follow when carriages stopped on-track, since the ride opened.

Bernard Thorogood, for the HSE, told the court: "The Smiler rollercoaster came into operation in 2013 in May and in our schedule ran from then until the time of the accident at the beginning of June 2015 in a way that was not as safe as it should have been.''

He said an "absence'' of proper systems for staff to follow when a carriage was stopped on the rails led to the accident.

Mr Thorogood added: "The upshot was that on June 2 although the computer-controlled system was correctly showing one of the farthest parts of the ride, the Cobra Loop, there was a stationary train, staff didn't see it and there wasn't a system to see it.

"They overrode the computer block on the system and sent the train with some of those sitting here today around the ride.

"As a result those in the train were injured when their train came into collision with the stationary train.

"Those in the front row suffered the greatest physical injuries and were life-changing in many cases.''

Mr Thorogood said the serious nature of the injuries suffered and the potentially "very high level of fine'' the case may attract, given Merlin's multimillion-pound turn-over company, meant the case should be moved to a higher court.

District Judge McGarva agreed and, giving his decision, said: "This is a case which involved a very high culpability on the part of the defendant in my view and exposed the victims to a high likelihood of very serious harm.

"This is a case involving a large organisation which may be ordered to pay a very high fine.

"Clearly this falls into a category of requiring allocation to the crown court - and that's what I'll do.''

The case was adjourned until a date to be fixed at Stafford Crown Court.

Lawyers representing some of the injured said Merlin's plea was a "milestone'' for the victims.

Speaking after the hearing, Paul Paxton, head of personal injury at Stewarts Law, said: "Going back to that notorious day now in June my clients sustained significant and in some cases life-changing injuries.

Mr Paxton, whose firm represents Ms Balch, Ms Washington and Mr Pugh, said: "This was not about punishment.

"It was about trying to find out what went wrong that day, what are the facts that led up to this accident and also to ensure - very critical to the families - to ensure that it won't happen again, not only on The Smiler ride but for other rides around the country and indeed in Europe.

"It is perhaps not surprising, is it, that there will be a guilty plea today because here are young people who've gone out to have a fun day out and come away, some, with an amputation.

"But that said, it is a comfort that there has been a guilty plea and now we won't have to go through the necessity of a trial.''

He said: "Merlin has acknowledged that it failed in its legal duty to protect people on The Smiler ride.'' 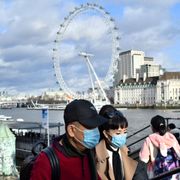 Coronavirus: Your legal rights when it comes to COVID-19