The Church has hit out at the National Trust and Cadbury in Birmingham over the name of their Easter Egg Hunt.

Archbishop of York Dr John Sentamu accused the chocolate giant of ``spitting on the grave'' of its religious founder by removing references to Christianity's most sacred festival from the spring event it runs nationwide with the conservation charity.

Cadbury, which was founded by Quaker John Cadbury in 1824, told the Daily Telegraph "we invite people from all faiths and none to enjoy our seasonal treats''. 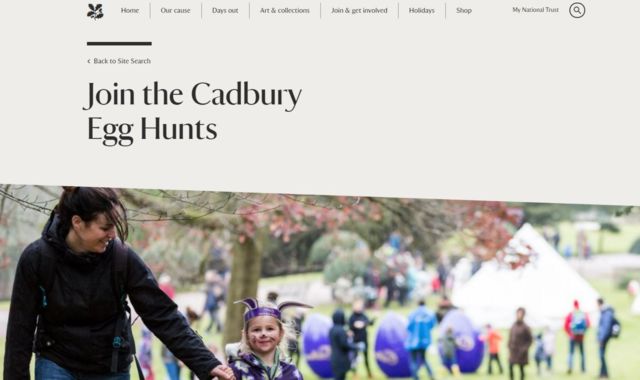 The National Trust said that suggestions it was downplaying the significance of Easter were "nonsense'' while the chocolatier dismissed the archbishop's claim as "simply not true''.

Some 300 Easter egg hunts will take place this year at National Trust properties, according a page on the Cadbury website headlined "enjoy Easter fun''.

Dr Sentamu told the Daily Telegraph: "If people visited Birmingham today in the Cadbury World they will discover how Cadbury's Christian faith influenced his industrial output.

"He built houses for all his workers, he built a church, he made provision for schools.

"It is obvious that for him Jesus and justice were two sides of the one coin.

"To drop Easter from Cadbury's Easter Egg Hunt in my book is tantamount to spitting on the grave of Cadbury.''

Cadbury's website makes reference to Easter in relation to the hunt in several places, but the word does not feature on the logo for the event.

The National Trust website invites people to ``Join the Cadbury Egg Hunts'' before adding: "Join us over the Easter holidays to run through muddy woodlands, around mystical lakes and along nature trails on a Cadbury Egg Hunt.''

A National Trust spokesman said: "It's nonsense to suggest the National Trust is downplaying the significance of Easter. Nothing could be further from the truth.

"We host a huge programme of events, activities and walks to bring families together to celebrate this very special time of year.

"A casual glance at our website will see dozens of references to Easter throughout.

"Our Easter events include our partnership with Cadbury's, which has been running Easter egg hunts with us for 10 years.

"They've proved consistently popular with our members and visitors. As part of its wider marketing activity at Easter, Cadbury's will always lead on the branding and wording for its campaigns.''

She said: "It is simply not true to claim that we have removed the word 'Easter' from our marketing and communication materials.

"Each year our Easter campaigns have a different name and this year our seasonal campaign is called the Cadbury's Great British Egg Hunt.

"It is clear to see that within our communications and marketing we clearly state the word Easter and include it in a number of promotional materials, including our website, where we do also promote our partnership with National Trust at this seasonal time of year.''