A British woman stabbed to death in Jerusalem has been named as University of Birmingham student Hannah Bladon.

The family of British student Hannah Bladon, who was stabbed to death in Jerusalem on Good Friday, said they are "devastated'' by the "senseless and tragic attack''.

They said the 20-year-old had been taking part in an archaeological dig that morning and described her as a "talented musician'' and "enthusiastic rugby player''.

She was attacked while travelling on a light rail train near the Old City, which was packed as Christians marked Good Friday and Jews celebrated Passover.

In a statement issued through the Foreign and Commonwealth Office they said: "Hannah was the most caring, sensitive and compassionate daughter you could ever wish for.'' 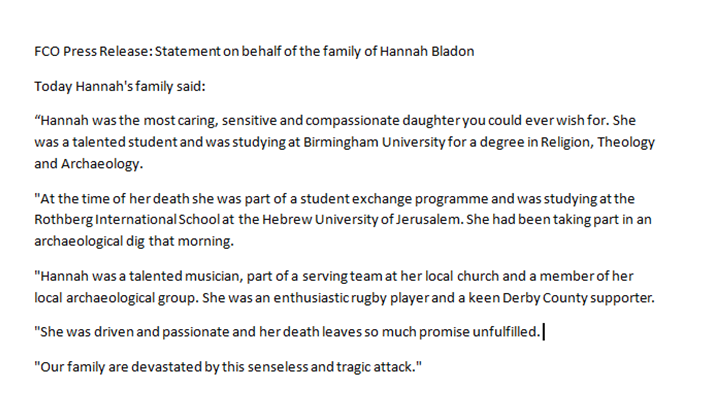 Paramedics treated Ms Bladon at the scene and rushed her to hospital, but she later died.

A pregnant woman and a 50-year-old man were also injured when the tram came to a sudden stop and in the aftermath of the attack.

Police detained a 57-year-old man at the scene, and Israeli Police Superintendent Micky Rosenfeld said the attack was carried out by an "Arab terrorist'' from Rasel Amud, in east Jerusalem.

Israeli intelligence service Shin Bet said the attacker had a history of mental illness, that he recently tried to commit suicide in hospital by swallowing a razor blade and that he was convicted of sexually abusing his daughter in 2011.

Israeli President Reuven Rivlin said he was "filled with sadness'' and that his country's "thoughts and prayers are with the family of the victim''.

He said: "This week thousands have come through the ancient gates of Jerusalem, to celebrate the feasts of Passover and Easter throughout the city - while the security forces work to ensure the safety of the dear residents and visitors to the city.

"And so we will continue to do. Terror can never overcome us. Terror will never destroy our lives here.''

Met launches investigation into a number of Downing Street events