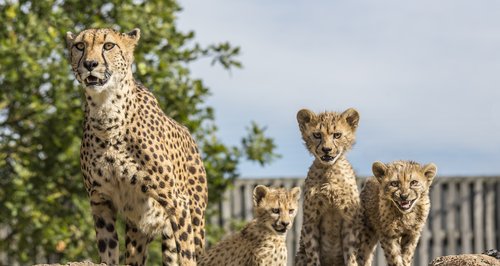 Three new Cheetah cubs that were born at West Midlands Safari Park get ready to face the public today.

They're the first to be born at the zoo in it's 41 year history.

16 week old Cody, Cairo and Chloe are today exploring the caves and rocks that form part of the Park's Cheetah Plains.

The two males and one female club were born to first time mum, Epezi.

Two cheetah brothers, Munya and Bulika. Further cheetah’s arrived in August 2008 from a captive breeding facility in South Africa, which included the father of the new cubs, 'Cheetor'.

The Park now has 10 cheetahs, the collective name of which is known as a coalition.