A teacher from Birmingham's been jailed for sexually abusing young children, over more than 30 years.

Trevor Tulloch from Ashfield Avenue in Moseley, indecently assaulted three girls and a boy – all of infant school age – between the late 1970s and 2007.

Tulloch inappropriately touched and kissed the children at his previous Highgate home.

Some of the youngsters were discreetly assaulted during ‘play fights’ while others recalled to detectives how they sometimes awoke from sleepovers at Tulloch’s home to find him touching them under the covers.

An investigation was launched in June last year when a woman contacted West Midlands Police to report her daughter had disclosed being abused by the 58-year-old back in 2007 when she was aged eight.

The enquiry uncovered further victims: a girl who was repeatedly abused between 1979 and 1981 when she was about 10, plus a boy subjected to bouts of child cruelty and indecent assaults in the late 80s when he was aged between eight and 10.

And specialist Public Protection officers identified another victim who regularly suffered at Tulloch’s hands, including one incident when he kissed her and touched her bottom at Chandos Primary School, Birmingham, where he taught computer lessons in the 1990s.

Tulloch denied all the accusations against but was found guilty by a jury on 20 of the 22 counts against him.

And on Friday (11 Nov) at Birmingham Crown Court he was jailed for 12 years for a total of 15 indecent assaults, two sexual assaults, plus individual counts of child cruelty, child indecency and assault.

He is also required to sign the sex offenders register for life.

Police: "It's never too late to report sexual offences"

Investigating officer, Detective Constable Phil Langstone, said: “Tulloch clearly thought that, as time passed, he’d got away with his offending – but he is finding to his cost it’s never too late for people to report sexual offences.

“Thanks to the mother who reported her concerns last year we were able to uncover the full extent of Tulloch’s predatory crimes and identify more victims – and together we’ve been able to secure justice for them.

“Tulloch claimed the accusations against him were false. However, his victims proved very compelling witnesses: they provided a lot of detail and their accounts really struck a chord with the jury. Their police interviews were at times very emotional, it took a great deal of bravery to disclose exactly what Tulloch had done to them.

“Our Public Protection teams are specially trained to handle investigations sensitively and to hold survivors’ hands through the process. It doesn’t matter if offences took place many years ago…as this case shows, we can build strong cases against offenders and make them pay for what they’ve done.” 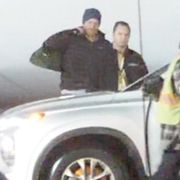