More than 100 firefighters have been sent to tackle a ''severe'' blaze at a recycling centre in Birmingham.

Smoke has been seen for miles around the city centre after a blaze at the site on Clarel Avenue in Saltley.
West Midlands Fire Service said 17 engines were sent to tackle the fire involving 800 tonnes of mixed plastic, rubber and metal.

Here's an amazing video taken above the fire by West Midlands Fire Service using a drone:
Our Reporter Laura Barton has been to the scene:
People are being advised to avoid the area.
The fire service said calls were first received about the fire at 2.08pm and said people living nearby should close doors and windows.

Neil Johnson from West Midlands Fire Service has been speaking to Heart:

Public Health England in the West Midlands are advising people if they've breathed in smoke: "Smoke can irritate airways/skin/eyes & cause coughing, wheezing, breathlessness, chest pain. Get medical advice if affected by #SaltleyFire"

Western Power say 40,000 homes in the Yardley, Small Heath, Sparkbrook and Sparkhill were without power for a few hours as the fire affected a nearby pylon. We're told all the homes power is back on now.
Update issued at 7.30pm:

More than 100 firefighters and 17 fire engines tonight (Tues 29 March) remain at the scene of a severe fire at a scrap materials recycling company in the Saltley area of Birmingham.

The smoke plume can be seen for several miles, and at least one hundred 999 calls were received by Staffordshire and West Midlands Fire Control from concerned members of the public who started to call in at around 2.08pm to ask about or report the fire.

Our resources at the scene also include two aerial platforms, high volume water pumping equipment and a mobile incident command unit from which the operation is being coordinated.

Chief Fire Officer, Phil Loach, said: “Fire crews have made progress and the fire has now been surrounded. These types of incidents draw in a lot of resources in the initial stages – this is to prevent the fire spreading. It is likely to be a protracted incident and we will be dealing with the incident for at least the next 24 hours.

“Although this type of incident creates a surge in demand for firefighters and Fire Control, we will be re-distributing our remaining resources to provide the best protection possible in case of other incidents.”

At this stage we believe that the fire started accidentally. It is estimated that some 800 tonnes of metal, mixed plastic and rubber is alight. As well as protecting nearby buildings and premises from fire damage, crews have been creating fire breaks in the scrap material in an effort to stop the fire spreading.

Our operations at the scene have been split into different sectors. A nearby canal is among the sources being used to get water to the scene, via a water relay system.

Several agencies are in attendance with us at the scene, including the police and ambulance services, the Environment Agency, Network Rail, Public Health England and utility companies. Emergency services and partners are likely to be on the scene through the night.

A Public Health England spokesperson said: “Members of the public whose homes might be affected by smoke are being urged to keep their doors and windows closed as a precaution for the time being.

“Motorists who have to travel through the smoke should keep windows closed, turn off air conditioning and keep their air vents closed. The situation is being monitored and further advice will be issued when necessary.”

We’ve also been in touch with Birmingham Airport to inform them of the smoke plume and can confirm their operations have been unaffected. In addition, we are liaising with Network Rail and monitoring the impact on local rail lines.

We will also be working closely with Environmental Protection officers as part of the multi-agency response to the fire. 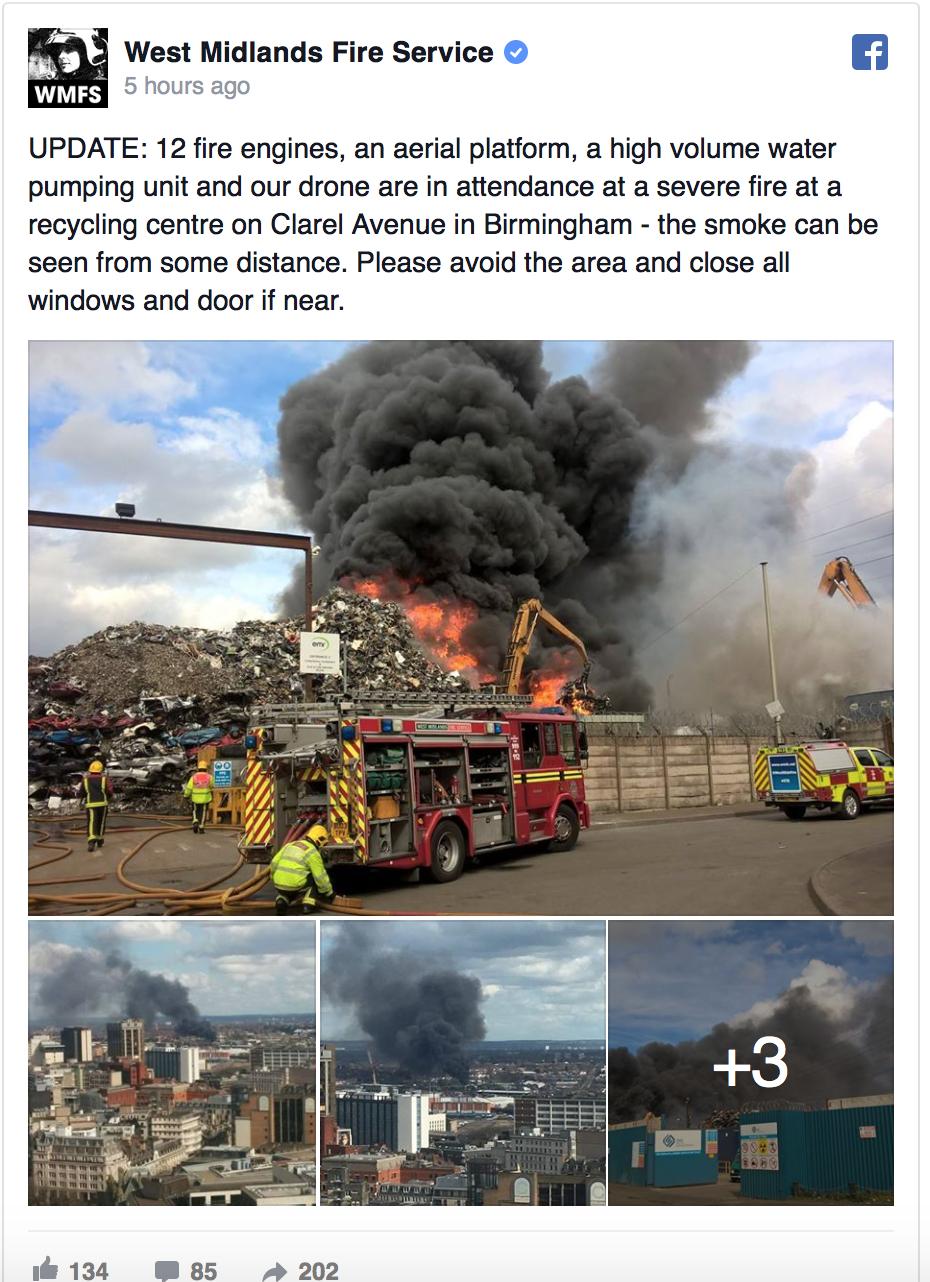 We now have 17 fire engines and more than 100 firefighters at the Saltley fire.

More than 100 999 calls have been received by our Fire Control in relation to the incident.

We have liaised with Birmingham Airport to inform them of the smoke plume.

A nearby canal is among the sources being used to get water to the scene, via a water relay system.

The fire has been described by officers at the scene as severe.

Our operations at the scene have been split into different sectors. The overall operation is being run from a mobile incident command unit. As well as working to extinguish the main fire, crews are working hard to try to stop the it spreading to other scrap.

We are liaising with Network Rail and monitoring the impact on local rail lines.

We will also be working closely with Environmental Protection officers as part of the mult-agency response to the fire.

We now have two aerial platforms there, and an on-site digger is being brought into use to move and separate the scrap materials.

At 2.08pm today (Tues 29 March) we started to receive a number of calls reporting a large fire at a scrap yard in Saltley, Birmingham.

We currently have around 70 firefighters, 12 fire engines, an aerial platform and a high volume water pumping unit at the scene in Clarel Avenue.

The smoke can be seen for some distance and people in areas affected by it are advised to keep doors and windows closed as a precaution for the time being.

The fire involves approximately 800 tonnes of metal and mixed plastic and rubber.