Images have been released of a mystery man seen leaving a block of flats with a missing pregnant woman from Walsall.

Christina Chandler, 21, was staying with her family after ending a recent relationship, and was last seen on Thursday 5 February.

It is believed she is around 18 weeks pregnant.

She was reported missing to police on Sunday 8 February by worried relatives and an investigation was launched. 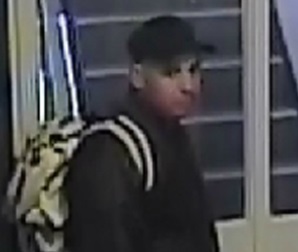 CCTV images of the last believed sighting of Christina have been released. The CCTV also shows a man enter a block of flats in Sandwell Street, Walsall shortly after Christina at around 3.25pm on Thursday 5 February. Both leave the flats a few minutes later and walk towards Caldmore Road.

Officers think the man may hold information and are appealing for him to come forward. He is described as Asian, in his mid-20s and carrying a backpack.

Christina is described as white with straight brown hair and brown eyes, 5’3 of thin build and last seen wearing jeans, dark boots, a grey hoody and a green jacket.

Anyone with information is urged to call Walsall police on 101.