More than seven weeks after he went missing, a Stourbridge man's been found dead.

The family of 43-year-old Matthew 'Liggy' Gill say his body was found on Sunday afternoon. He'd been missing since October.

It was a post from Liggy's partner Annette on the Find Liggy Facebook page that confirmed the news. In it, she asks for people to give "Matt’s family and friends time to come to terms with this news and to grieve in private".

Police are yet to confirm the news. 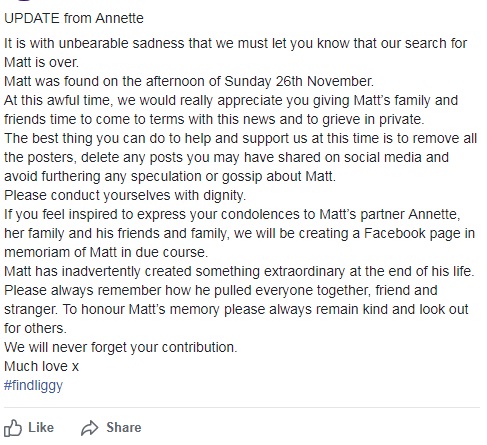 He left the house on the morning of Friday the 6th of October and never returned.

Since then the family had been sharing missing poster's on Facebook, using the #findliggy on Twitter and getting Matthew's football club West Bromwich Albion to help in the search for him.

His colleagues from B&Q in Kidderminster, where he was part of the management team, also helped with the appeal and distributing posters nationwide.