Prince Charles took to the stage last night - as part of Stratford upon Avon's celebrations of 400 years of William Shakespeare.

He made a surprise appearance as Hamlet at the Royal Shakespeare Theatre. 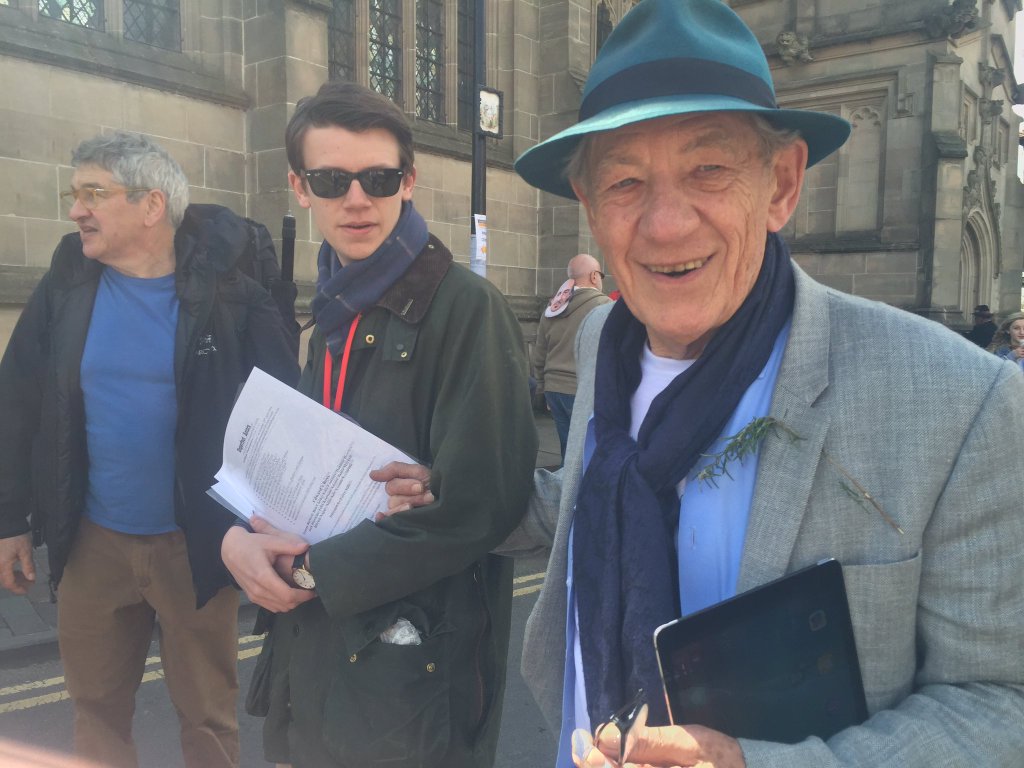 Charles, who had been watching the Shakespeare Live! From The Royal Shakespeare Company show with the Duchess of Cornwall, was heard to speak from the wings, asking: "Might I have a word ... ''

Then followed the opening lines to what is one of Shakespeare's best-known soliloquys: "To be or not to be, that is the question.''

The show, which featured Shakespeare-inspired work spanning a range of musical genres, was screened live to 368 cinemas in the UK and Europe.

The surprise royal appearance marked the end of a day celebrating the town's most famous son.

Earlier Charles visited the last resting place of the Bard at Holy Trinity Church, laying a wreath at his grave, after touring the site of a new garden located on what was the location of the world-renowned playwright's former home.

The Prince, paying his respects with a moment's silence and prayer inside the church, was shown an inscription of Shakespeare's grave stone which reads "cursed be he who moves my bones''.

The Rev Patrick Taylor explained how it was believed the writer had his grave inscribed with the curse because he was "petrified'' his remains might be moved to a nearby charnel house, which lies behind a church door just a yard or two from the grave.

Charles replied: "It certainly reminds you of your mortality''.

As he looked around the church which has been a place of worship for 1,200 years, the Prince remarked: "It is such a special place.''

He was given a guidebook to keep by Year 5 pupils from Stratford-upon-Avon Primary School and met an elderly couple who had married in the church 60 years before. 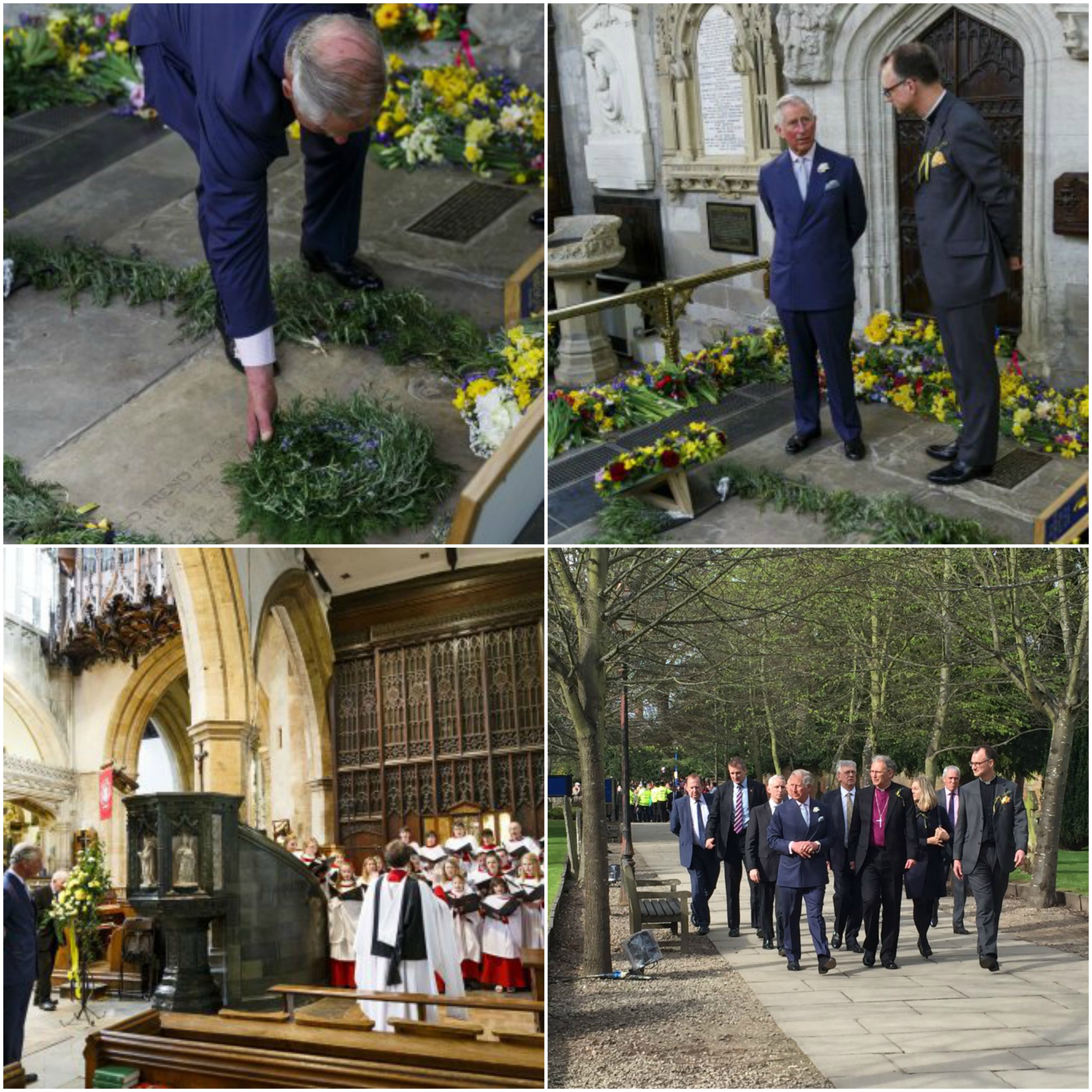 Charles had a little earlier toured the New Place on the former site of Shakespeare's town house, now long since demolished, where a garden is being established to remember the poet's legacy and works.

For the Bard's supporters, the day had started with a theatrical parade through the town to pay homage to the writer, who was born and died on April 23.

Bishop of Coventry Christopher Cocksworth, speaking following Charles visit to the church, said: ``It is a great and proud day for Stratford.

In the morning the town witnessed a theatrical parade, made up in equal parts of contemplative moments, symbolism and riotous celebration, courtesy of a New Orleans jazz band.

The street celebrations featured civic dignitaries, local schoolchildren, musicians and performers, and a centrepiece ceremony with the unfurling of a birthday flag bearing the writer's image. 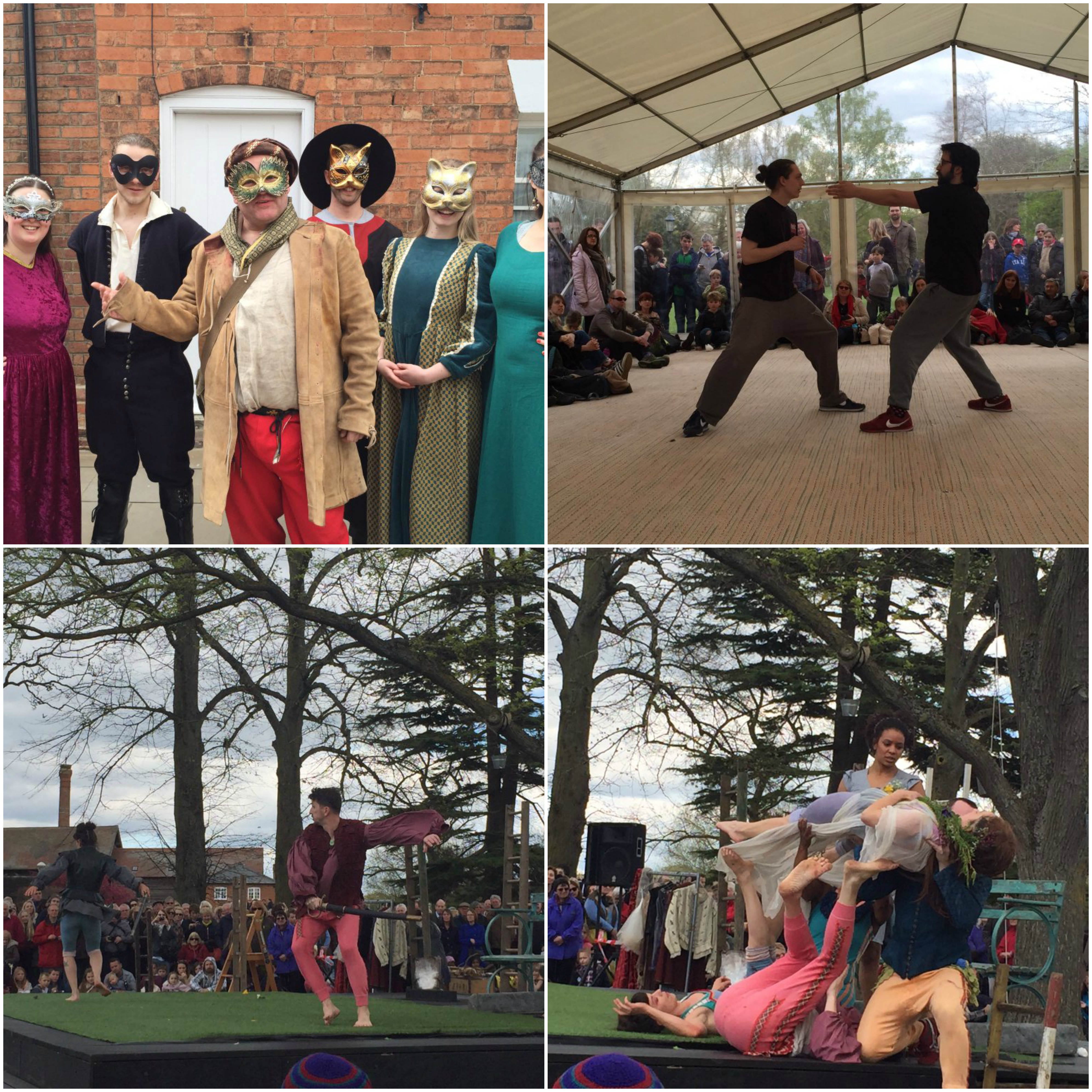 The crowds were asked to play their parts by tossing sprigs of rosemary "for remembrance'', as the Bard wrote in Hamlet, as a funeral bier of flowers was pulled through the town's streets.

Visitors then donned thousands of Shakespeare face-masks which had been handed out.

The mood struck a more celebratory note with the appearance of the 12-piece Wendell Brunious Band from Louisiana who shuffled and shimmied along the parade route with a New-Orleans flavoured jazz procession.

Band leader Andrew LeDuff, said the group, including members of New Orleans' Tulane University, had jumped at the chance to mark Shakespeare's global impact and "celebrate his life''.

Playing a key role in this year's landmark anniversary is the Royal Shakespeare Company, whose grand Stratford theatre on the banks of the River Avon continues to stage the Bard's plays in sell-out performances, in a testament to his on-going popularity.

Geraldine Collinge, director of events and exhibitions at the RSC, said the weekend celebration was a chance to remember the impact that the playwright, who was baptised in the town on April 26 1564, had on the English language.

Ms Collinge said: "All the things that he talked about in his plays so well are still things that still concern us in our lives today.

"Which is pretty amazing for someone who died 400 years ago.''

The celebrations also featured a fireworks display and a line of light, leading to Holy Trinity, as well as a graveside vigil.

Earlier, US president Barack Obama was treated to a special performance of scenes from Hamlet at Shakespeare's Globe Theatre in London, praising the actors as "wonderful''.

Shakespeare, who penned almost 40 plays, over 150 sonnets, and coined well-known phrases still widely used to this day, died in 1616.